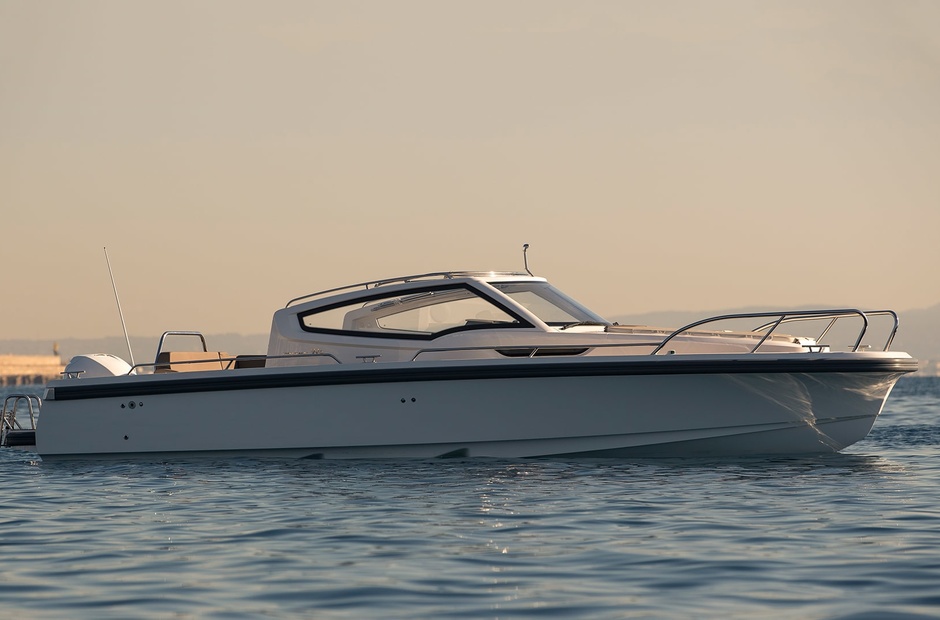 Award European Powerboat of the Year is awarded annually in the framework of the international boat show Boot Dusseldorf. It covers all categories of boats and motor yachts, except that the megayachts. Journal itBoat tells about the nominee for 2019. Last time we introduced the readers with boats up to 25 feet, caught in the shortlist for the prize this year. This article series will focus on the contenders for the title of “Best motor yacht of 25 to 35 feet.” Because yachts of this size are used mainly in the warmer time of the year as a jury award first of all, pay attention to their suitability for family holidays, design and habitability. What happens if you take the housing from the open boat and add to it the cockpit? At first glance, the idea is so — so, but the famous Finnish shipyard Buster turned to “marry” a proven reliable aluminum housing from the Phantom with the cockpit. As a result, the company has created a serious marine off road, and able to work in the snow and in the heat…

The boats interior can be called Spartan, but it adds some zest, as if to emphasize that Phantom Buster Cabin is not a toy. Cabin got panoramic Windows that give a 360-degree view. At the request of the owner of the vessel can install one or two outboard.

Minimalist interior design functional without compromising comfort: on-Board Phantom Cabin can accommodate up to 12 people, five on the bow platform. The spacious cabin of the passenger seat wheelhouse can be deployed to the table, thus increasing the number of seats in dinette, framed L-shaped sofa. New Flyer 8 Sundeck made in the attractive style of modern classics, combining light grey tones with black details and railings. The hull is designed for technology Air Step 2 that, compared to similar models of competitors, ensures good handling, stability, speed and high speed.

The designers at Beneteau as well, and usually tried to use every inch of space. Seat aft easy transformirovalsya in a spacious sunbathing area, throughout the boat there are plenty of lockers and stowage space and supplies. Also the boat was large for this size boat the ceiling height is 1.67 meters. Merry Fisher 1095 among the other contenders novelty will not name, a boat appeared in the lineup Jeanneau in 2017, but it can rightly be called special. Primarily for the 10.5-metre yacht unusual selected engine type — outboard motor. And, it turns out, is not just a marketing ploy.

External units are easier to install and maintain, plus Yamaha engines (which are equipped with boats) characterized by reduced vibration and create less noise. Also below deck the space that you can allocate to the needs of tourists. So a small boat can boast of two or three full quarters. Swedish Nimbus decided to create a boat that combines all the best that was implemented at the shipyard earlier. Weekender 9 received case, is clearly reminiscent of the legendary DC 26, and also inherited a lot of interesting decisions from the boat 21 DC, 32 DC, R-series and other models. However, a simple copy of the new boat call does not work. Body, though similar to its colourful predecessors, but was developed from scratch and has a modern step design.

In the bow is a cabin for two people and bathroom with toilet and galley, in order not to waste space inside, taken out to the outside. This layout becomes very easy during the stay at anchor. The boat comes with an outboard motor and inboard engine choice that is not as common. Finnish shipyard presented the third generation of its reliable boat Targa 27, first saw the light in the early 90’s. This “sea Rover” as it was called in England, enjoyed great popularity. New Targa 27.2 remained true to the original concept.

The boat was a bit longer and wider, which allowed to increase the level of comfort. The flybridge has become even more convenient was familiar sliding doors of the salon, teak deck plating and seats. The model has retained excellent performance characteristics and can go to sea even under severe weather conditions.