On May 16, over 100,000 fans celebrated the successes of the Ajax football team in Amsterdam’s Museum Square. But this was not the only event that was celebrated that evening in the capital of the Netherlands. Simultaneously with the celebration of Ajax, a large-scale celebration of the 170th anniversary of the Royal Van Lent shipyard, which is part of Feadship, took place, to which the official opening of its new dry dock was timed. The day before, it was possible to see how dozens of boats of the historical fleet moored along the embankment (240 m long!), Part of the dock turned into a stage and a lounge area, and the organizers, in a leisurely bustle, were finishing the final touches: everything was ready to receive the Queen of the Netherlands, who honored her the presence of the holiday.

Ever since Feadship became part of LVMH in 2008, shareholders have continued to push Royal Van Lent to build larger yachts. However, she showed rational conservatism and was in no hurry to make a decision, because she did not want to leave the compact and inhabited island of Kaag. But times changed, the industry’s course towards increasing the length of the fleet became obvious, and it was impossible to wait any longer: there was a risk of losing its leading position. The shipyard management has been looking for suitable locations for new production for a long time, considering primarily Rotterdam and Amsterdam. The shareholders insisted on the latter, guided by one of the main principles for the profitable placement of real estate: “Location, location, location”.

As a result, the chosen point turned out to be optimal: the new dock is located in close proximity to the historic center, next to the motorway and the airport, from where you can get by helicopter in a matter of minutes. But the main thing is that the new shipyard is located next to the “ancestral nest” on Kaage, which determines not only a smooth transfer of employees between these sites, but also the preservation of the previous partners and suppliers, with some of which Royal Van Lent has been working for 30-40 years.

If someone asks us to build a 160-meter yacht tomorrow, we will most likely say “no” right away, since we do not know how to do this yet. We do not want to promise the impossible and we will move up in small steps, maintaining the quality for which we are appreciated and protecting the good name of the Feadship brand.

Two years ago, there was a vacant lot on the site of the dock, and first it was necessary to strengthen the soil: in fact, most of the construction costs went into the ground, and the contractors managed to drive the required 1,408 piles before their deficit appeared in the Netherlands, dictated by another wave of economic growth. Then 6150 cubic meters were “poured” into the dock. m of concrete, and in comparison with this stage, the erection of ground structures was an easy and quick task.

The design of the building at Royal Van Lent was approached with caution: on the one hand, the building was supposed to be beautiful inside and out, but on the other, the task was to preserve the Kaag atmosphere, to which the clients are accustomed. By the way, the heads of the main departments of Royal Van Lent participated in the design of the premises, and each of them expressed their wishes for optimizing the work of their division.

As a result, the building is built around workshops, so the flows of workers and materials are organized very logically. The dimensions of the dock (160 × 26 m) are quite impressive, but at the shipyard it is regarded primarily as a reserve for the future.

Only three Dutch shipyards have been awarded the honorary right to use the prefix “Royal” in their names: Royal Van Lent, Royal De Vries and Royal Huisman. Only companies that are active in the same business and have been owned by the same family for a hundred years can be called royal in the Netherlands. Before obtaining the status of “Royal”, they undergo a serious audit, in which various state organizations take part – from the police to the Ministry of Employment. For example, the Van Lente family acquired a shipyard on Kaag Island back in 1877, but began producing pleasure yachts there in 1901, so it was only granted royal status in 2001. And five years later, the De Vries shipyard also received the “Royal” attachment.

The dock is designed in such a way that it can be divided and simultaneously work with two ships. But he gave the shipyard the most freedom in terms of height: it is 38 m, and now boats can be immediately equipped with masts, and their descent takes only a few hours. The largest yacht built on the Kaage was Symphony (101 m), and there it was necessary to tinker with it, since the superstructure actually touched the ceiling. And when this boat came to the new Amsterdam dock for survey, it not only fit into it without any problems, but even looked kind of … small.

Another point worth noting is that it’s not entirely fair to claim to build sustainable yachts if they are built in old, non-environmentally friendly factories, and Feadship has set an exemplary example in this regard. According to Jan-Bart Ferkail, the new shipyard in Amsterdam is arguably the greenest in the world. To heat the buildings, surplus heat energy from neighboring enterprises is partially used here, and solar panels not only cover 85% of the roof, but are also built into the glazing. A total of 2,262 solar panels are capable of generating 550 MWh per year, and this energy is consumed competently and economically. 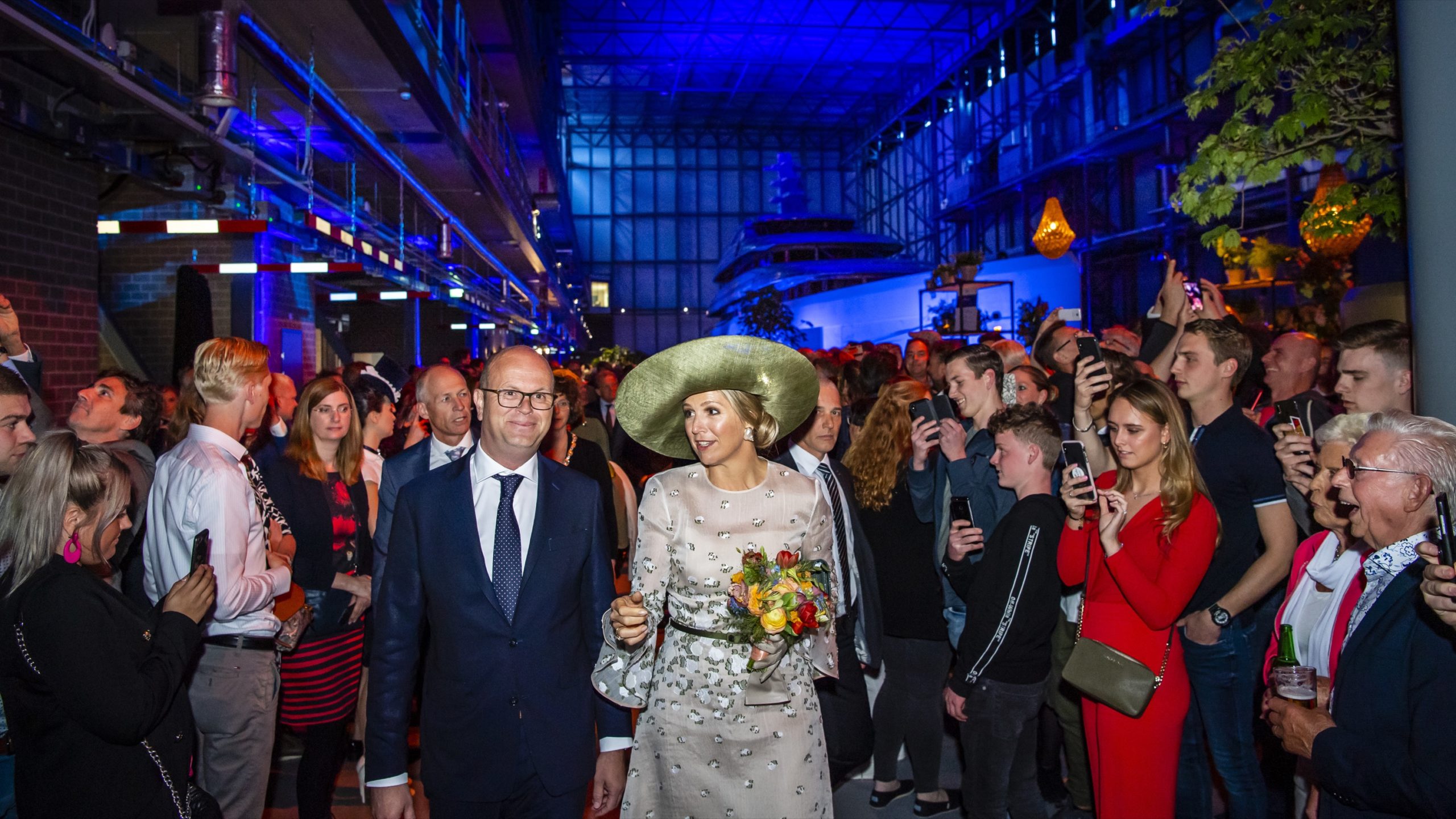 The new dock has plenty of room for both yachts and parties. In the center of the photo is Queen Maxima of the Netherlands and Jan-Bart Ferkail, CEO of Royal Van Lent

Thus, the Amsterdam shipyard has become the fourth Feadship site and in the future will also serve as a base for sea trials of ships built in Makkum, Kaag and Alsmeer. The company will no longer have to build temporary container yards with mobile workshops in the port during the test period. Even before the official opening of the dock, several yachts had already visited it, and a few days after our visit, full-scale work on the equipment and completion of project No. 816 (length 88 m, exterior design by De Voogt Naval Architects, interior design by Nauta Design) began there, which will continue one and half year.

The expansive activity of Feadship did not end there: Royal De Vries is also increasing the number of docks in McCum, and there are rumors that Royal Van Lent is thinking about building another dock in Amsterdam, but no official announcements have been made on this yet. And finally: having gained an easy access to the big water (from the North Sea, the new shipyard is separated by only 20 minutes of sailing and the only lock that can accommodate ocean liners), the company was able to develop even more intensively the direction of refits, to which it pays more and more attention. And Amsterdam is a very suitable place for this.