Today, cooperation between motorists and “boatmen” in the creation of original samples of marine technology is observed in different brands. So in the Brabus Shadow 500 model, the latest automotive technologies from the tuning studio Brabus (Germany) and shipbuilding from Axopar (Finland) were combined. Following the accepted doctrine, Brabus Marine (a division of Brabus) limited its involvement to exclusive interior design and increased power of the new product.

I’ll clarify right away: if the Axopar 37 was the prototype of the Brabus Shadow 800, then the Brabus Shadow 500 on the stand is a tuned Axopar 28 T-Top, a well-known boat that has been tested in tests and has received many awards. Therefore, here I will mainly touch on the interior and running differences of the premiere model.

Introducing the boat, Axopar CEO Jan-Erik Vitaala said that it belongs to the premium segment of the brand. And the first thing that distinguished the model with a rigid awning on massive pillars were the colors: the signature dark gray Gunmetal Gray of the hull, applied with a fair amount of manual labor, and the red Brabus Red upholstery of the seats and sofa in the bow cockpit made of water-resistant Silvertex material. The cool stitching of the seats is impressive: at the Brabus production site in the town of Bottrop (50 km from Dusseldorf), where we were taken from the exhibition, we saw those smart machines that are able to sew surfaces of any complexity.

The bow cockpit, with its high bulwarks, soft backrests and full body pillows, is still a transformer, convenient for lunch at a removable table and for sunbathing. The latrine compartment at the front of the steering console has received a number of nice details, such as the Corian washbasin surface, oak trim and mirror. The steering console has been fitted with a luxurious carbon fiber dashboard, which emphasizes the high-tech look of the boat. A steering wheel with push-button control of transom plates (synchronously and separately), bow steering wheel, music, etc. began to strongly resemble an intelligent car steering wheel. By default, the boat is equipped with a Garmin GPSMAP 8412 (12 ″) touch chartplotter, although the show model had two monitors. Options include the Garmin Radar 18HD and the Scout Sea-Hub with WiFi / 3G / USB. 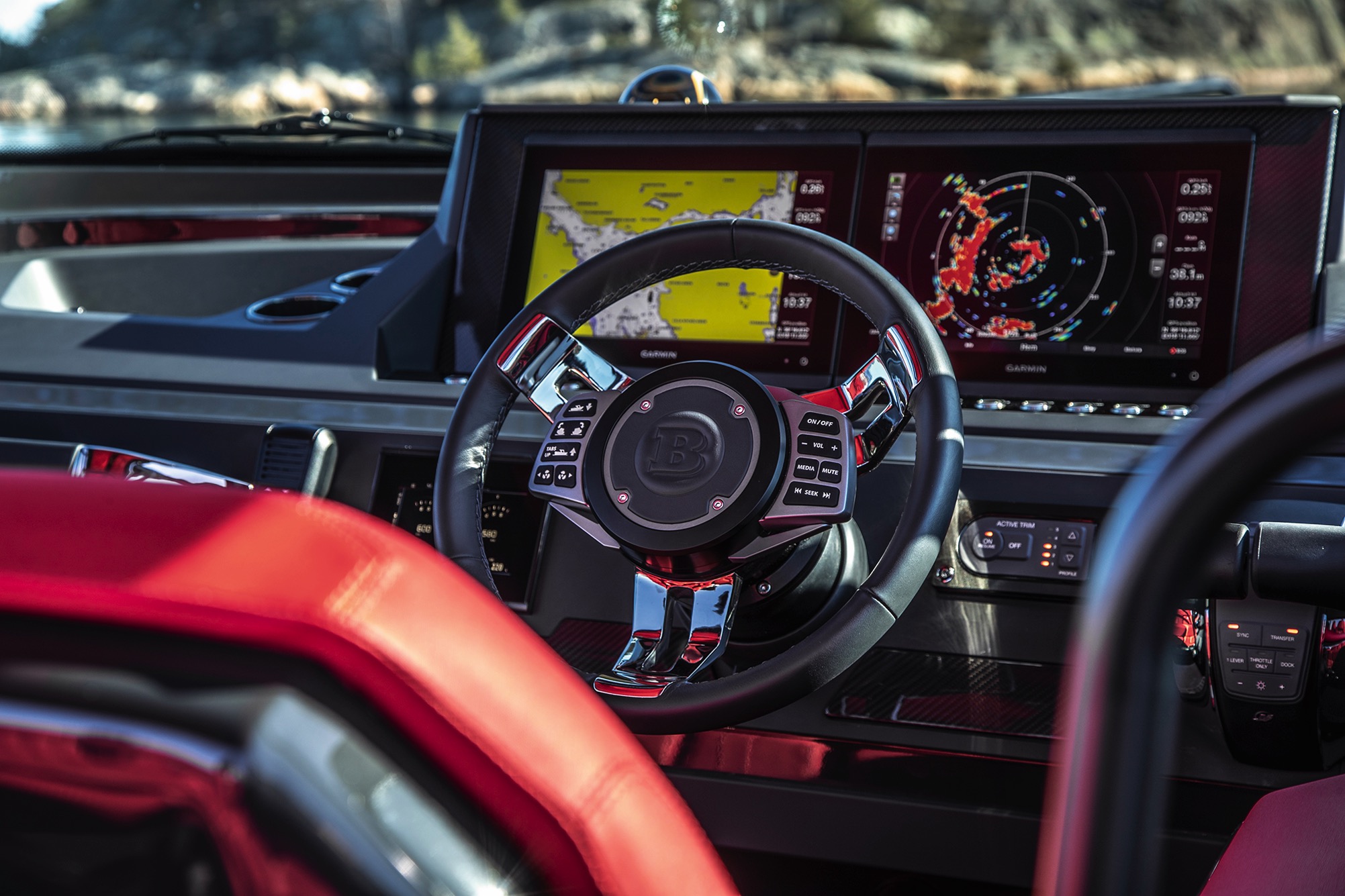 Many structural and finishing details, in particular the dashboard, are made of CFRP

There are two chairs at the console, behind them – three or four more (options). Further, there may be a wet bar (electric grill, sink, refrigerator with top loading), a cap with a couch and a cabin below (Aft Cabin option) or… nothing. 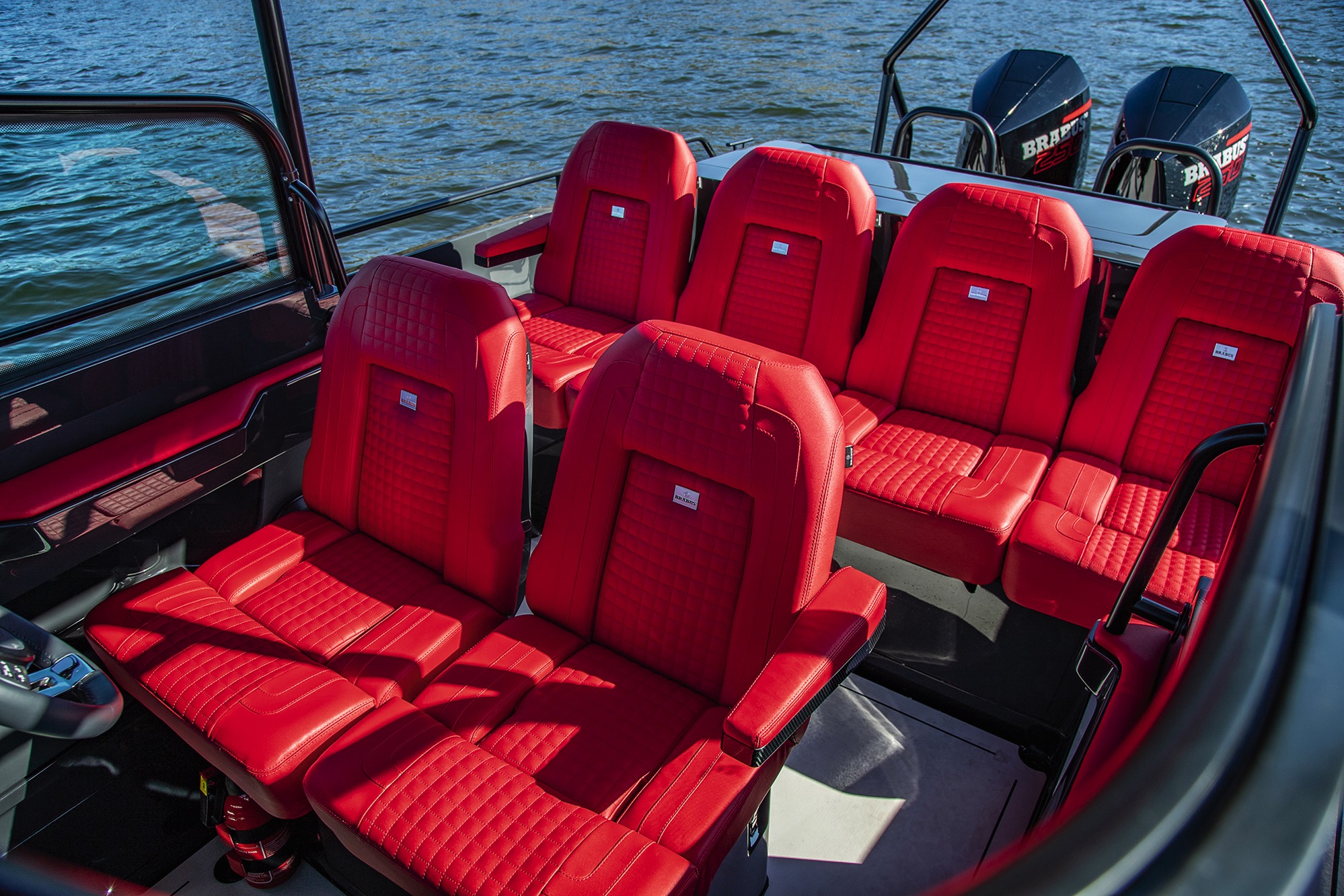 In general, among the mass of exhibits in the Düsseldorf Messe pavilion, the boat was eye-catching with its paint and catchy appearance with a daring angular design, and a cool black-ti titanium coating on the racks and railing, and a lot of interesting details that are noticeable upon closer examination. I will conclude the brief review with one more characteristic feature: the Brabus Shadow 500 transom was decorated with two 250 hp suspension brackets. with., which I will say in more detail.

This beauty is a terrible force!

Unlike the Axopar 28 with a maximum outboard power of 2 × 200 hp. with., various tests of which showed a speed of 45-48 knots, there were two new generation Mercury ProXS250 CMS XL V8 250 hp each. from. each with the word “Brabus 250” on the casing. If you don’t know what the new Mercury engine looks like, you might not even guess. 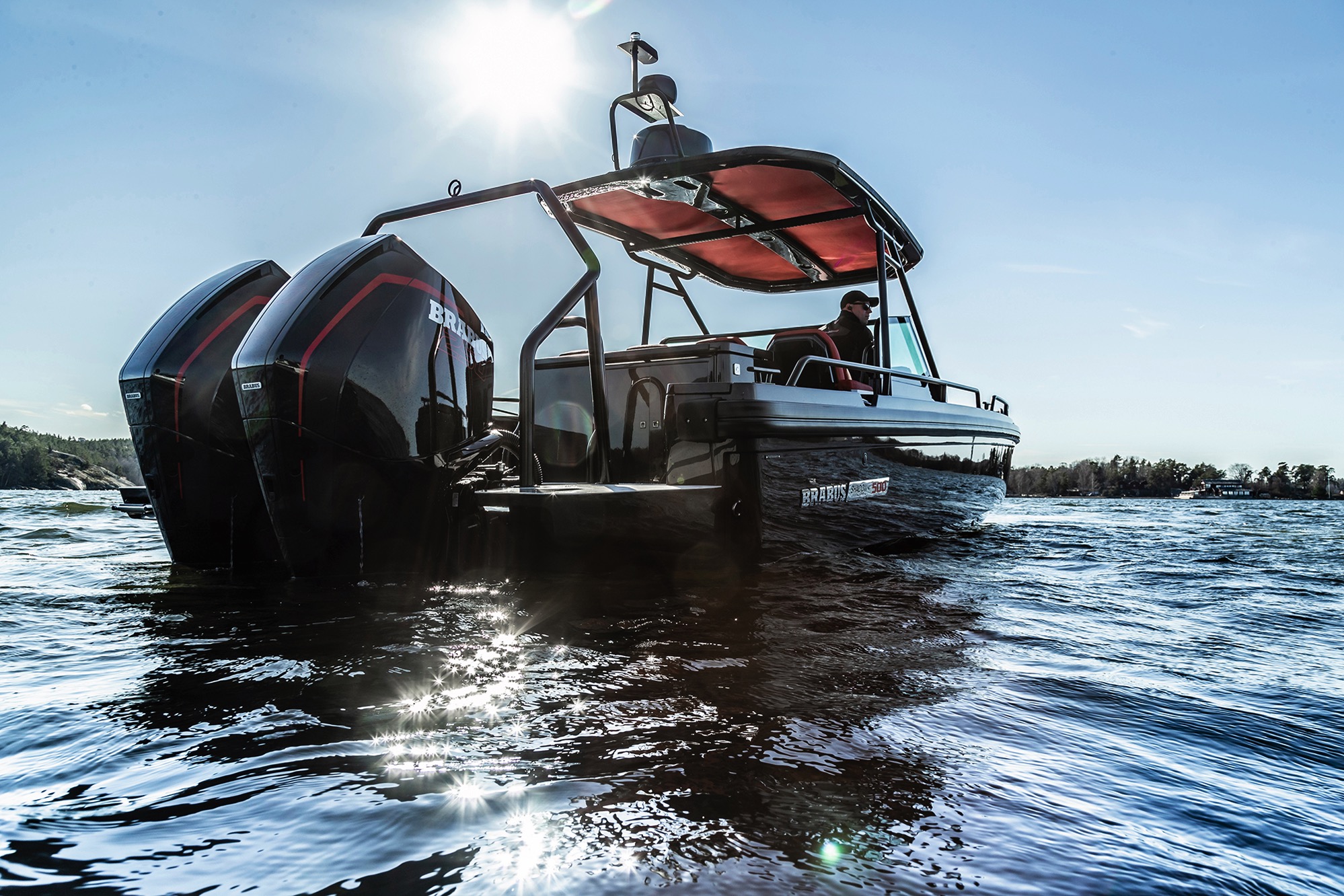 What does this increase in power give? There have been no independent tests of the Brabus Shadow 500 yet, so you will have to rely on the information received from the manufacturer. When I asked how the boat performed during the “home” tests in the fall, Jan-Erik Vitaala said that in the process of selecting the diameter / pitch of the propellers, they managed to accelerate to 57 knots (6160 rpm). And he showed a screenshot of the device on the steering console with these numbers.

According to him, the boat with a vertical stem, longitudinal steps and two transverse complex configurations (deadlift on the transom 22 °) behaved perfectly both on the forward run and in circulation. Fantastic acceleration and gliding, smooth ride, high responsiveness to the steering wheel shift … And its seaworthiness can be judged by the recent successful test of Axopar 28 with two Mercury 200 hp. from. on sea waves 3-4 points (wave up to 2 m).

In general, everything is logical. Brabus “land” pumps additional horsepower into the motors of cars, and Brabus Marine puts more powerful motors. True, this required a number of constructive measures, including additional reinforcement of the transom with carbon fiber and reinforcement of the stringers. The game, apparently, is worth the candle, although you have to pay for power and speed: at maximum speed at 500 hp. from. the flow rate is 194 l / h (for two motors) versus 134 l / h (400 hp).

The estimated cruising range of the Brabus Shadow 500 at a cruising speed of 40 knots (5000 rpm) does not exceed 100 miles. It may seem a little to some, but here you should take into account both the power (read – consumption) and the volume of the tank (280 liters). In addition, the Axopar 28 has a 2 × 200 HP installation. from. the range is not much different, so it all fits!

I ask a question: can I buy Axopar 28 T-Top without motors? Answer: you can. And then order two Mercury 250 hp. from. and put on the boat? It is possible, only it will hardly be registered, and the guarantee will become invalid. So only Brabus provides “legal” power as a special chic.

The full name of the model shown at the exhibition is Brabus Shadow 500 Black OPS Limited Edition “1 of 28”; the last numbers mean only 28 cases are planned to be produced.

In the time it takes to produce one Brabus Shadow 500 Black OPS Limited Edition boat, 30 standard Axopar 28s can be built.

In the basic configuration, the boat is equipped with Garmin navigation electronics, and each customer receives a Garmin Quatix 5 Sapphire GPS smart watch as a gift.

Every Brabus Marine has a “Brabus Shadow by Axopar” sign on board and a facsimile stamp of Konstantin Buschmann, CEO of the Brabus Group, a testament to quality and exclusivity.

At the 2019 Geneva Motor Show, the city sports car Brabus Ultimate E Shadow Edition “1 of 28” was shown, which, in addition to the similarity in the name with its marine counterpart, has a lot in common in the interior design.