It’s one thing to create a masterpiece, quite another to preserve it. The Italian company Bellini Nautica, which has been restoring redwood Riva for more than half a century, has assembled an exclusive collection of these boats, which I was introduced to by Romano Bellini, the owner of the shipyard and a unique museum.

Probably everyone knows about Riva boats. The legendary brand inspires a sigh of admiration when it comes to vintage series from the shipyard’s golden age. In the 1950s and 1960s, Riva boats were not just associated with dolce vita – they were dolce vita themselves. They were chased by celebrities, they were filmed in films, and not everyone could have Riva. The masterpieces were produced in a limited edition, and the exclusivity of these boats never required proof.

Years passed, fashion, concepts and models changed. Much of the historic Riva fleet has been lost over time. That is why the collection we want to tell you about has a special value. Romano Bellini did not begin to create it from scratch: they were old friends with the owner of Riva. Romano shows a photo signed by Carlo Riva: “In 2012, he was at my shipyard, watched the restoration process, took a ride on the Aquaram and literally shed a tear, saying that we are doing the work of the highest quality”.

And this is true: now the “vintage” division of Riva itself is carrying out restoration work at the Bellini shipyard. According to Romano, his company is the only authorized production of Riva, and all yachts refitted at Bellini Nautica automatically confirm the status of the brand’s original products. 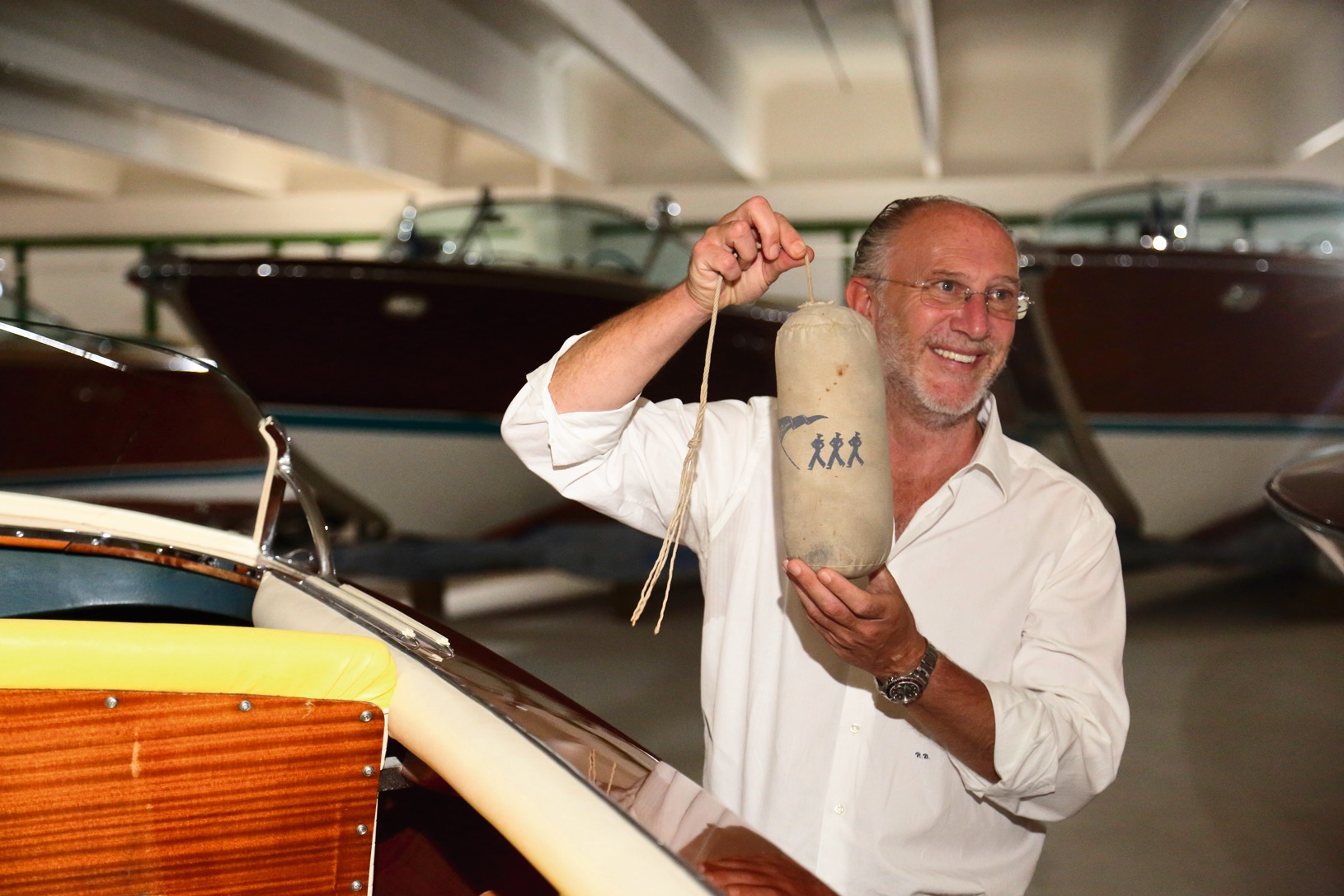 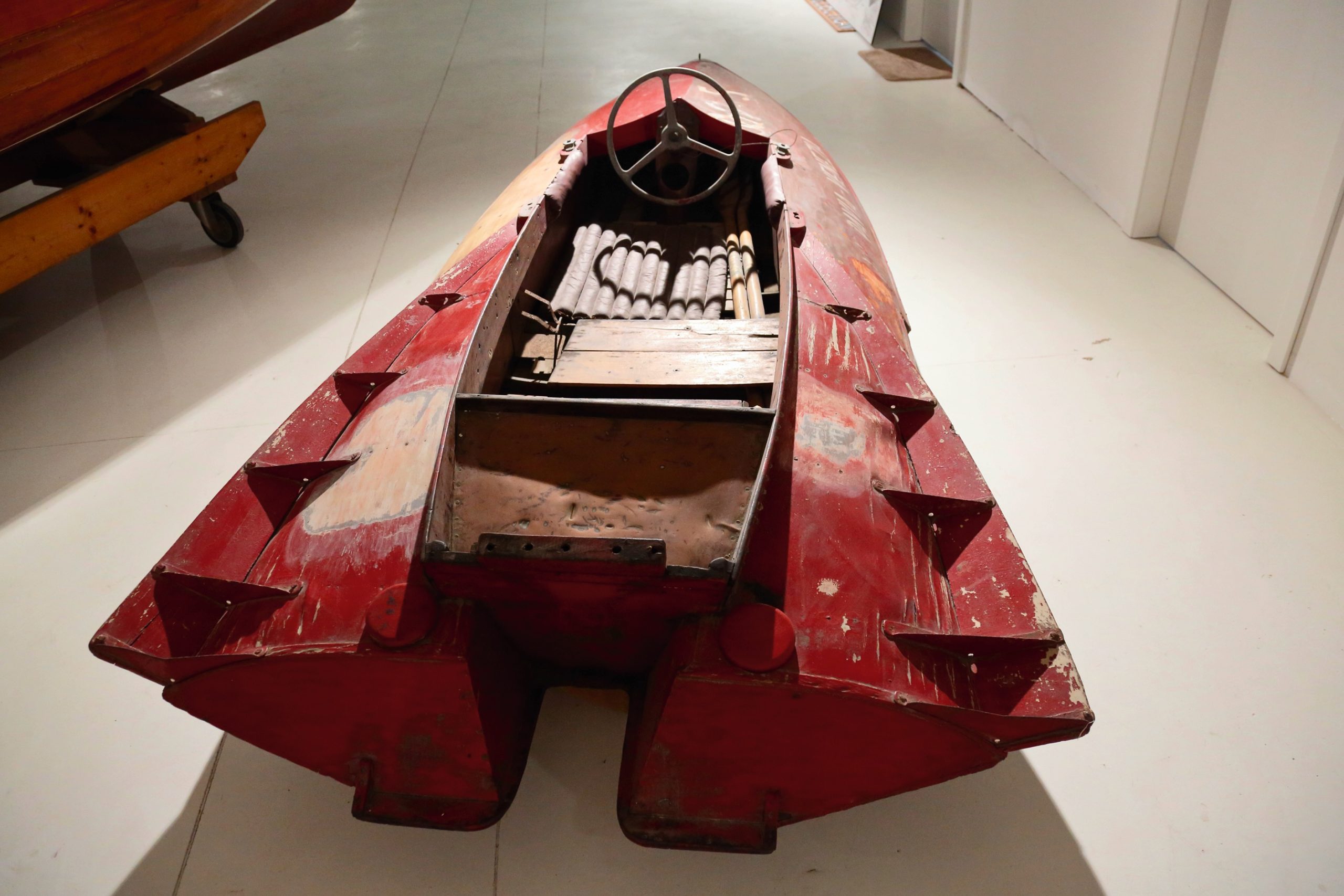 The owner of the museum does not hide his pride and calls his collection the most significant in the world. The boats fell into the hands of the collector in different ways: some Bellini bought for decent money, some went to him in a dead state for almost nothing and required a deep reconstruction. Such is, for example, the Riva Lancetta built in 1951. This is one of the first models with a stationary four-stroke engine designed by Carlo Riva.

“My lancetta is the only one in the world today,” Bellini says. “It belonged to the owner of one of Italy’s largest prosciutto producers and was gathering dust on the farm.” The name of the Negronetto ham brand still flaunts on the lacquered board of the lanchetta.

“We have our own paint shop: some of the Rivas require twenty or more coats of varnish,” explains Romano Bellini. – We restore about ten boats a year, and about fifty more are serviced by us. We are approached by Riva owners from all over the world. “

Romano Bellini has received offers to sell the collection more than once, but he believes that his museum is more valuable than any money

It was Romano Bellini’s grandfather who began to restore wooden boats when they were at the height of fashion more than 50 years ago. When fiberglass appeared, not all Riva owners were in a hurry to part with their wooden “toys”, and additional demand arose for brokerage and restoration of wooden ships. Currently, a number of vintage boats of this brand still live in the world, and the rarest and most famous examples of Riva are put up for auction from time to time.

The Bellini Nautica Museum has 16 vintage Rivas – almost all of the models that have contributed to the evolution of the brand. There is no such set even in the collection of Riva itself.

“I really like my 1954 Riva Sebino, – we come to the next exhibit. – This is one of the first mass-produced models and the first one that I bought for my collection. It cost me 300 euros. Even the original padded fabric fenders have survived. And here, for example, Riva Scoiattolo 1957. There are two or three of them left in the world. This was the first Riva with an outboard motor. ”

Nearby is the Riva Olympic, a modification of Super Florida. The model, named after the 1968 Olympics, offered its owners a comfortable water experience and was also indispensable for water skiing enthusiasts. The Riva Olympic has a front seat and a sunbathing area aft. This was the last Riva with one engine.

Every time I met Carlo Riva, I listened to his stories with pleasure and admiration. And once he sent me his giant poster with a dedication: “To those who understand and appreciate the soul of my boats.” I cherish this valuable gift.

The Riva Junior (1966) replaced the Riva Florida and proved to be the most economical model of the time. Junior has often served as a tender for large yachts and is in demand with celebrities. In particular, Brigitte Bardot had this.

Riva Ariston was produced in 1950-1973. According to Carlo Riva, this is the best boat he has ever designed. The recreation area consists of two rows of seats with the possibility of attaching a sun lounger at the stern. One of the Aristons starred in the movie “Mambo”, where she proudly scampered through the Venetian canals. Bellini continues: “My 1956 Riva Ariston is the second in the collection. I bought it in the early 1980s for the equivalent of 700 euros. And once another Ariston came to us for restoration, from Lebanon, with a side pierced by an automatic burst. Then the happy owner of the rarity took his favorite away in an unknown direction. “ 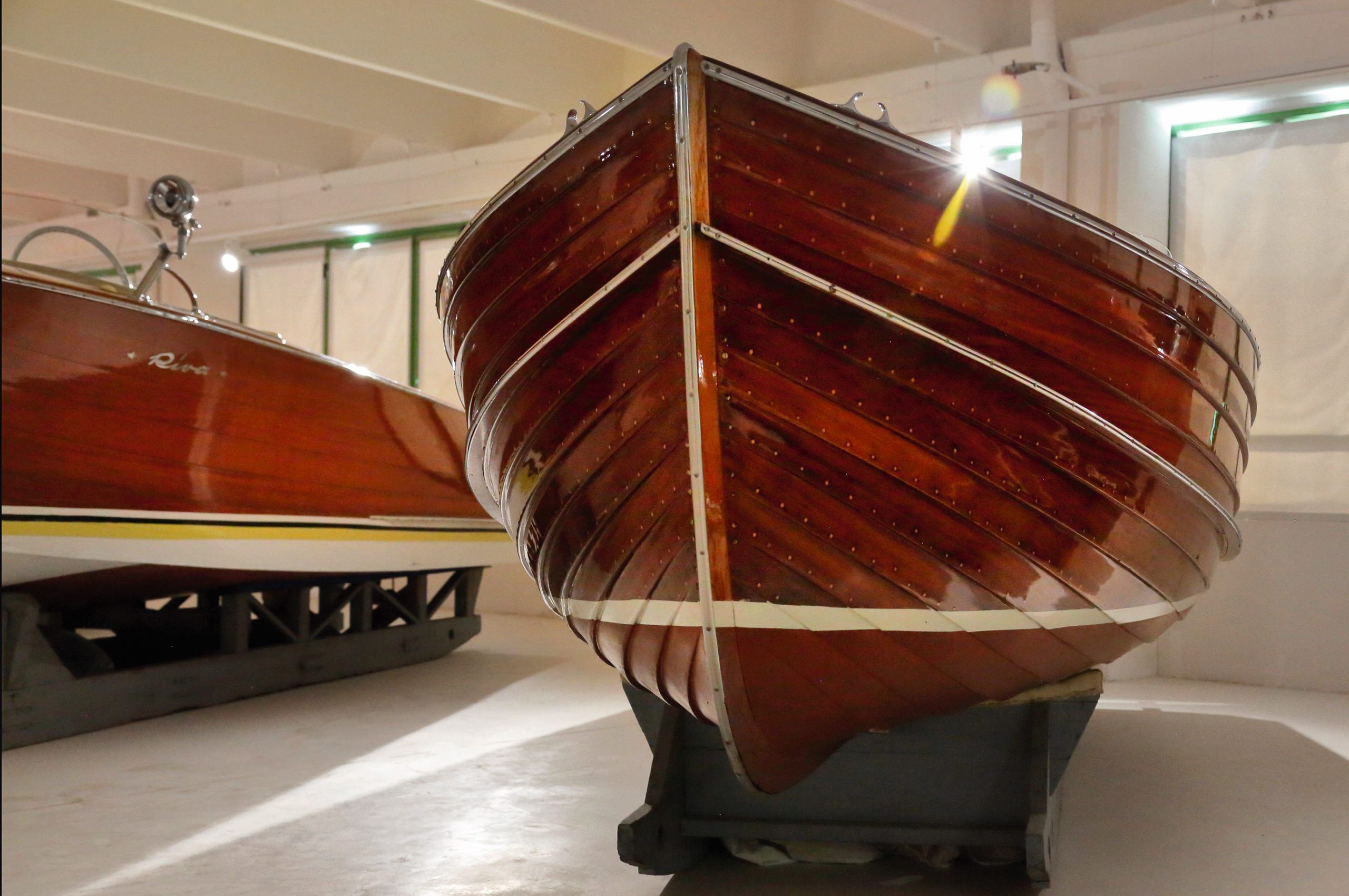 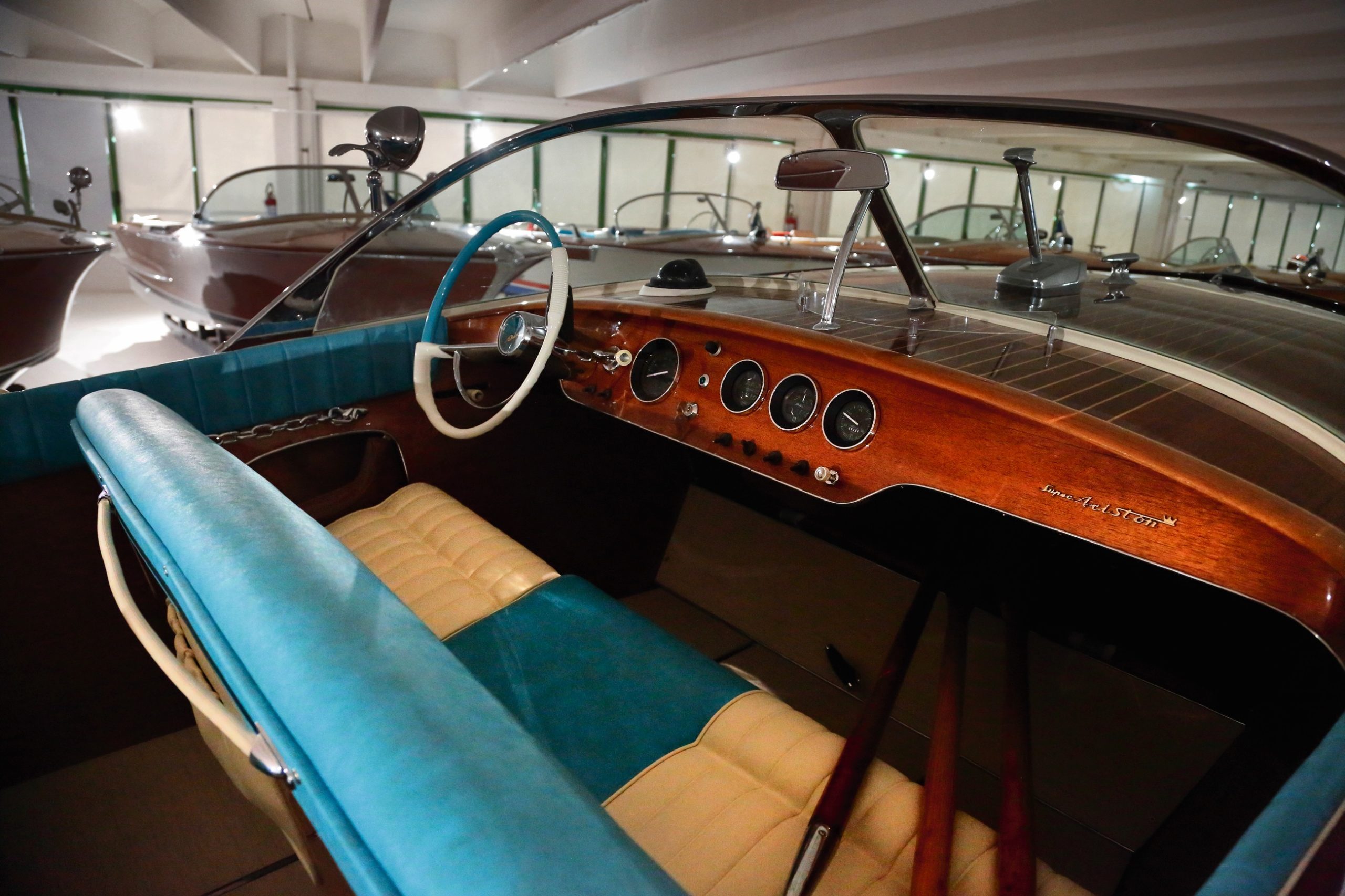 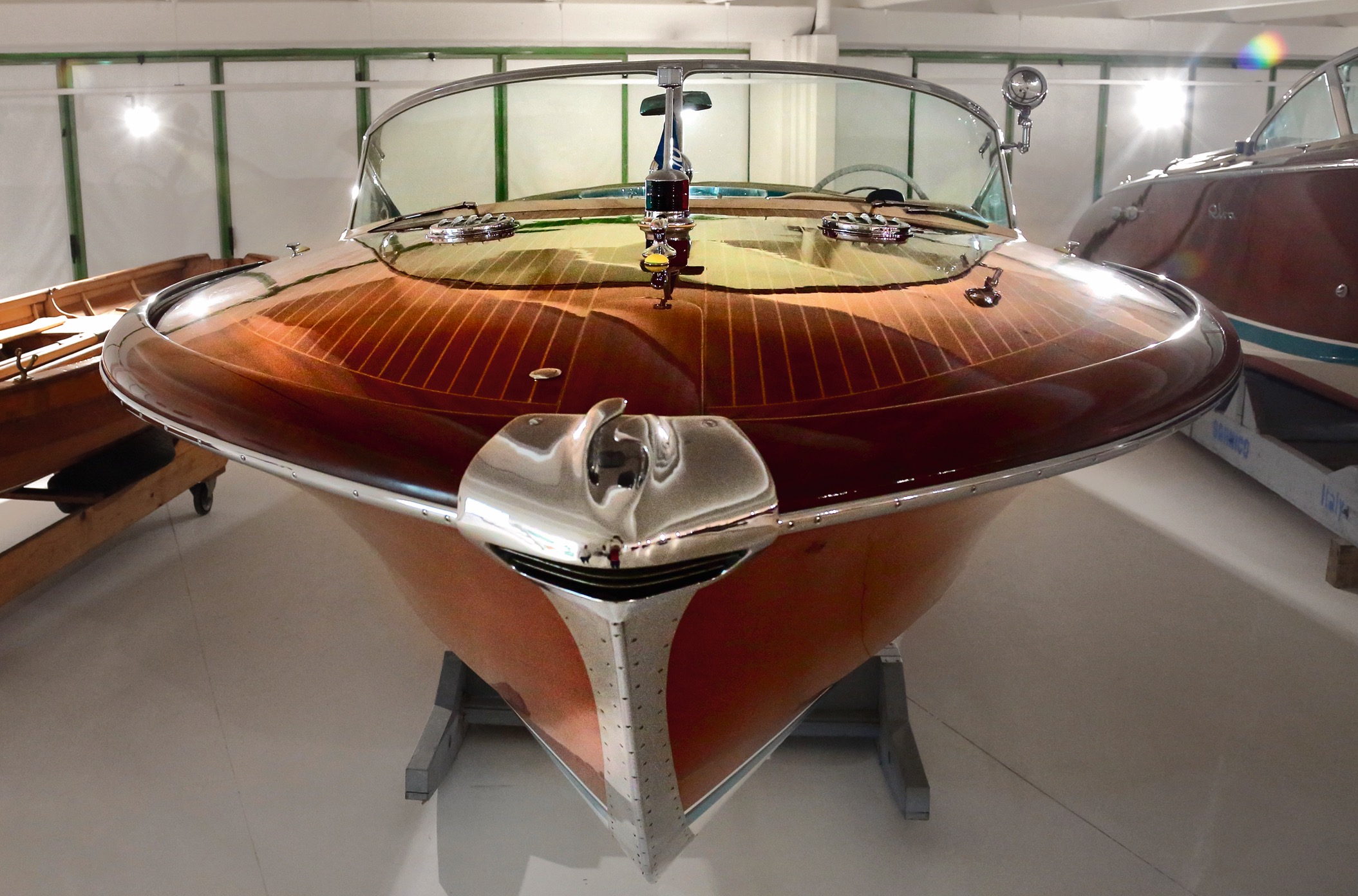 Riva Aquarama 1971 – one of the “youngest” exhibits

In the center of the exposition was placed another amazing boat – Riva Super Ariston 1973 with hull No. 1001. Powered by a 350 hp engine. from. it accelerates to 42 knots. This is one of the fastest wooden runabouts in history. Next to her is the Aquarama of 1965, building number 101. Even people far from the boating theme know about this model: it was she who turned Riva into a globally recognizable brand. The model was produced from 1962 to 1996 and had Super, Special and Lungo modifications. The latter was built in only seven copies, one of them is also in Bellini’s collection, like the predecessor of Aquarama – Riva Tritone.

The 1977 Aquarama Special – also a very rare specimen – can reach 46 knots. Another 1971 Aquarama, building no. 483, starred in the film “Sapore di Mare” and was one of the last to be designed by Carlo Riva himself.

Bellini’s collection also includes the one-of-a-kind Riva Racer, which in 1929 took part in the Pavia – Venice race. Perhaps it is the oldest Riva today. Another exhibit of the museum is the rowing rowing Riva Inglesina, which was built in the 1920s by Serafino Riva, Carlo’s father.

All Riva collected by Romano Bellini are not dead museum pieces. They are alive, on the move. From time to time, boats leave the museum and spend time on the water, crossing the surface of the beautiful Lake Iseo.