The first day of the championship in the Dragon class, which Thursday kicked off in St. Petersburg, turned out to be informative and entertaining. 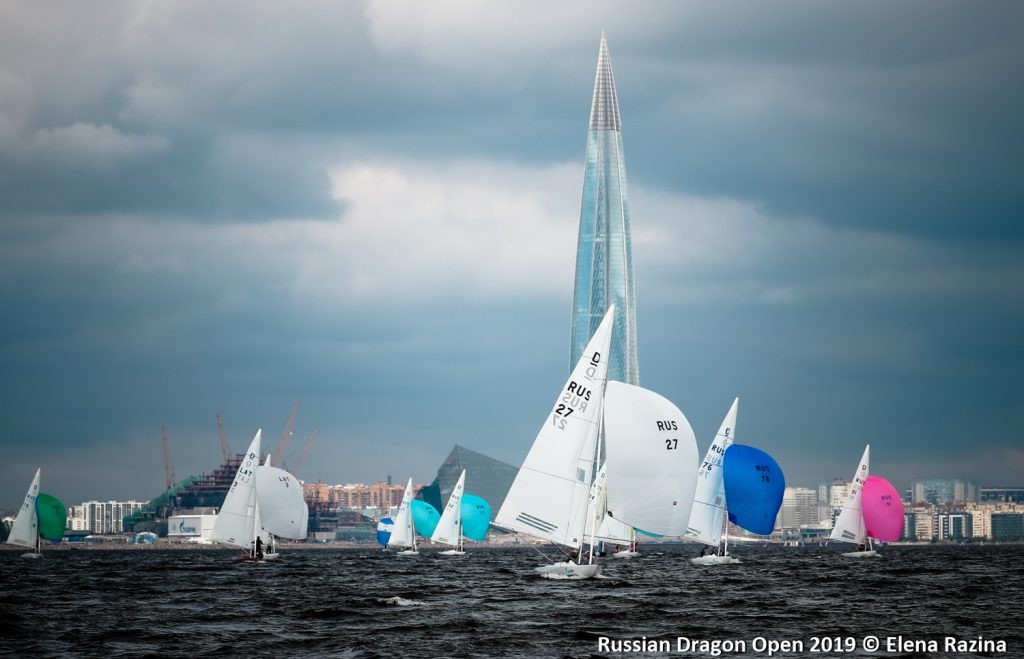 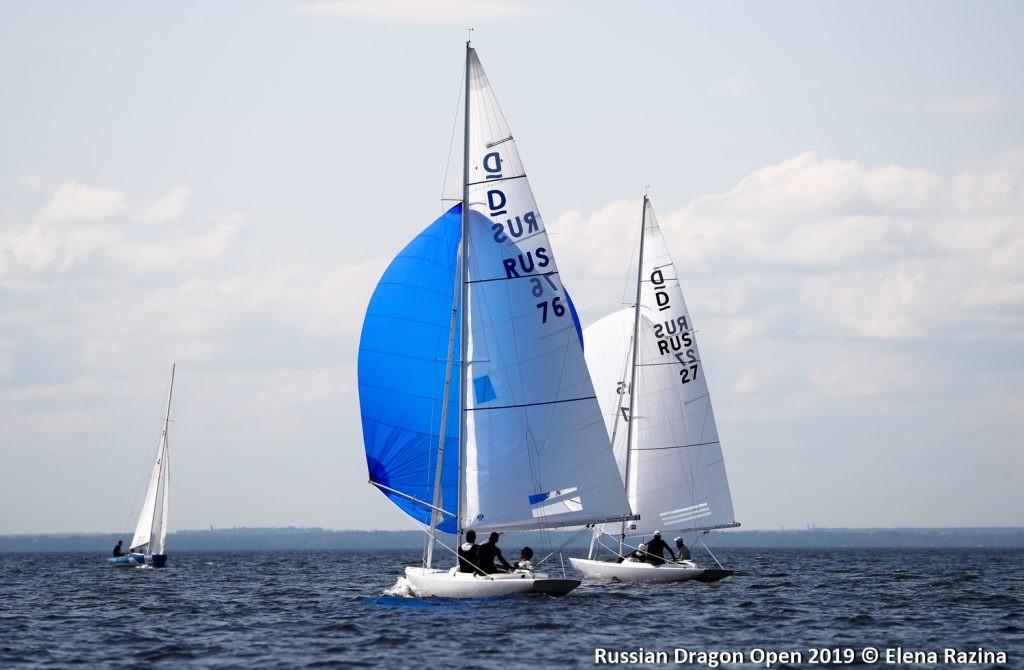 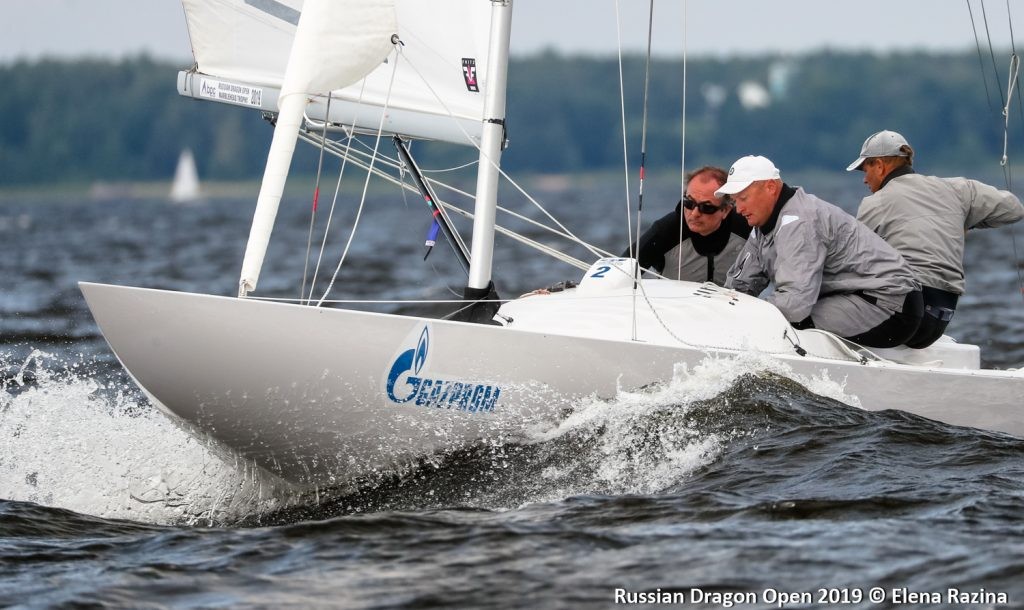 According to the website http://russiandragon.ru good fresh wind, steady in the Eastern part of the Gulf of Finland, allowed the Race Committee to hold three complete the race. Each of them took its own way, unpredictable scenario.

The first launch is better managed RUS27 Anatoliy Loginov, and by the top mark boat Annapurna came as a leader. The successful prosecution was Dmitry Samohin, who throughout the race attempted to overtake his opponent. Especially close to success his team had at the end of the first loop, when almost simultaneously with the opponent rounded the bottom mark.

On the second tacking most vivid impression of himself left the team of Pedro Andrade, brilliantly proven in the races of the regatta Marblehead Trophy, which had been completed in Saint Petersburg. Starting the climb to the top of the sign with the 10–th position, Portuguese rider made it for the fourth! However, the finish was for the Portuguese are not so optimistic: seventh place for a racer of his level can hardly be considered successful. And the victory was celebrated by Anatoly Loginov. Dmitry Samokhin remained in second place, three points in this race was taken by Sergey Borodinov.

The next race started in 13.43 practically unchanged wind conditions. Tacking ended quite suddenly for those who are in the last days I used to lead teams Samokhina, Galina Loginova and Andrade. The first sign came Estonians from Tallinn yacht club Kalev (EST 5) for them to lay in a course before the wind riders ENG 84 (Sergei Bakharev). In the first five this step were also 55 RUS (Yuri Kulikov), ENG 34 (Vasily Senatorov), EST 17 (Eduard Gorbunov). As mentioned above, Dmitry Samokhin, Anatoly Loginov and Pedro Andrade was occupied at the time only 7, 10 and 12 positions, respectively. What an unexpected waste from the repeated winners of national Championships!

However, the second tacking radically changed the balance of the race distance, returning to life by several teams. Dmitry Samokhin has made a striking comeback, getting to second place from seventh place and rushed in pursuit of the leaders racing team Yuri Kulikov. Mikhail Senatorov took to sign the third, but the Estonians had to fight, not for leadership, but for the middle of the top ten, where they were joined by Victor Fogelson and – attention! Pedro Andrade.

Final segment (and the entire second loop) was a truly striking manifestation of the skill of the racers Dmitry Samokhin. The team was able to win back from rivals 6 places and finish the race first. Well made and Mikhail Senatorov, eventually becoming the second. Yuri Kulikov was satisfied with third place. But on the fourth position still broke the Portuguese crew. He, we recall, had to get up from the 12th position. That failed to Anatoly Loginov, who this time wrote in his passive 9 points.

In the third and final race of the day is immediately after the start there was a clash of the Estonian boat EST 5 (Alex zhigadlo) and the Russian RUS 13, with the result that Estonians suffered an injury and withdrew. Recognizing the guilt for what happened, came out of the race and sailors from the team of Vladimir Loginov. The race was the leader by a wide margin went to Anatoly Loginov. The fight for second and third places on the different segments of the race, but with equal chances of success were team LAT 3 (Anna Basalkina), ENG 76 (Dmitriy Samohin), RUS 31 (Mikhail Senatorov) and POR 84 (Pedro Andrade), ENG 35 (Victor Fogelson). The result is a second at the finish were Dmitry Samokhin, third place went to Michael Senatorova. Victor Fogelson finished the race fourth, Pedro Andrade – fifth.

At the end of the day, the championship leader Dmitry Samokhin (5 points), the second is Anatoly Loginov (11), the third row of the table located Pedro Andrade (16). Here’s how the riders assess your performance.

– The fight was tough today. Three races are difficult, both physically and psychologically. Tried to keep concentration. The wind was varied – very large taps with gain and attenuation. Understand that during the race there will be many permutations, and you want to keep the spirit and work to the end.

– What can you say about the opponents?

– Anatoly Loginov today were great. The first two of the parish. It should be noted Mikhail Senatorov – the boat good speed, the crew made the right decisions, it was interesting to compete with them. Pedro Andrade was stable, showed good results, but he had to get out of difficult situations. I think that all leaders are in good shape, and it will be interesting.

– The first two coming and unexpectedly low result in the second race. What happened?

– We had a small collision. One of the boats is suddenly and unjustly tied to us. I had to turn away, but then not be able to return to the fight. Well, it’s going to be a race…

The day was quite difficult for us. We often took the wrong decision, which was not in the best position. The race was unpredictable, but very interesting. Yes, we were wrong, but there is three days for productive work.

– Why couldn’t the first go from the start?

– We were just talking with the team about that this morning. Decided that this regatta we need to talk, to discuss the race, and I have to explain to the girls what I do and why take any decision. Also, I think that is a bit lost concentration. The last race we started well but the wind was very tricky, often changing direction. We were not expecting this and therefore are unable to get into the lead. Anatoly and Dmitry performed very well today, but there is still three days, so the result is unpredictable.