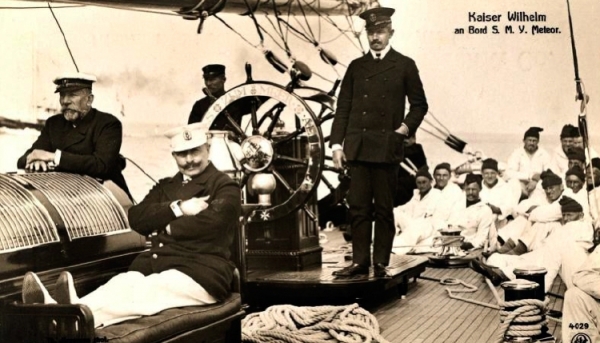 Our future lies on the seas!
William II at the dedication of the port of Stettin,
23 Sep 1898

The last Kaiser of Germany, Wilhelm II, aka William the Furious – a person is equally extraordinary and contradictory. The heir to the Prussian military traditions, because, perhaps, of English roots on my mother’s side – the eldest daughter of Queen Victoria, was distinguished by a passion for the sea, sea travel and yachting sports.

Most clearly this side has become manifest since the accession of the Emperor to the throne. Since 1889 Wilhelm regularly come in long cruises, dubbed “Northern expeditions” (“Nordlandia”), attended the regatta and the marine week in the British port city of Cowes, the German cities of Cuxhaven and Kiel. In the same year he made the first step towards the creation of a large German Navy, the establishment of the Main naval command, or “Reichsmarine”.

For six years, until 1895, Wilhelm personally on your own yacht took part in international races. From 1889 until the outbreak of the First world war sports yacht of the Kaiser, each of which their achievements have received worldwide recognition, with great success has performed in all prestigious competitions of Europe and the United States. 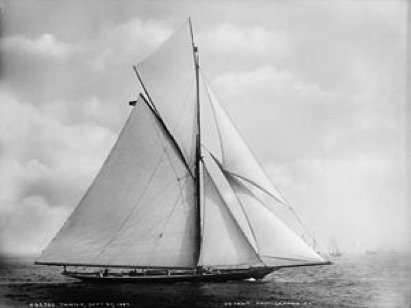 Only the Emperor was replaced by five sport yacht. They all bore the name “meteor” – in memory of the battle in the Franco-Prussian war, during which the German captain of the Knorr, defeated the French frigate “Memo”.

The very first of the Imperial yacht “meteor I” was purchased by Wilhelm in 1891 for 90,000 gold marks – in General a small amount was fully paid for by the German government. It was a cutter 108-foot (33 m) tender, initially bearing the name “Thistle” was built in 1887 in the Scottish shipyard of D & W Henderson in Glasgow. It was created in great secrecy in order to participate in the America’s Cup, which eventually took second place.

However, it is “meteor I” brought fame to the Kaiser as a yachtsman. For several years the yacht under his command performed successfully in many European regattas, and in 1895 the race of the Royal Cup great Britain beat the favorite yacht of the Prince of Wales (later king Edward VII) “Britain”.

The rapid development of the yachting industry was threatened by the emergence of rivals new, more modern yachts. Warning the slightest hint of possible defeat in the future races, prudently Wilhelm in 1895, placed in the shipyard of D & W Henderson new order. 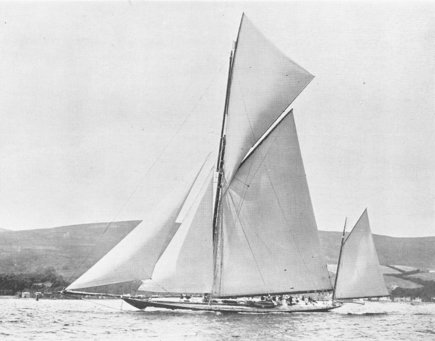 So at the beginning of 1896, there appeared a beautiful 128-foot (38 m) Gately tender “meteor II”. His design worked George Pennocks Watson (GL Watson & Co), who a few years earlier designed the yacht of the Prince of Wales. The construction of the “Meteor II” was held once again at the expense of the government budget. However, this time to spend the money through Parliament to the Kaiser managed with great difficulty.

In the first test during the Royal London yacht club Thames “meteor II” showed itself in all its glory. Imperial yacht finished in 13 minutes before “Britain” is also updated. English audience, did not expect the victory of the German crew, was met by “meteor II” in stony silence. In absolute silence, a shot rang out from the finish of the gun. 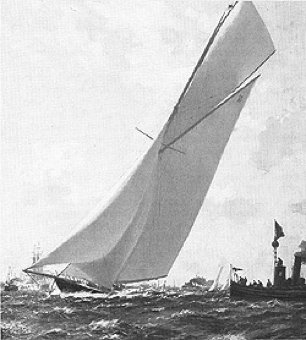 And 13 minutes later the Thames burst into a roar of greeting fans, whistles and sirens standing on the RAID ships, celebrated the arrival of “Britain” as if she was the winner of the race.

The crew of the “Meteor II”, half of which, by the way, was composed of English sailors who suffered the insult stoically and took it as a challenge. A few days later, the yacht won the English race Nore to Dover, ahead of “Britain” by 9.5 minutes, and in June 1896 in a race in Southampton her break with “Britain” was as much as 25 minutes. For several years, the “meteor II” was the winner of many international regattas. No doubt, it was the best sport boat at the time, a sample of the skill of British shipbuilders and the pride of Wilhelm II.

In 1902 the Imperial watch favorite took schooner “meteor III”. It was designed for William American designers H. G. Barbey & A. Carey Smith, built at the shipyard Townsend & Downey Shipbuilding Co. became an improved version of an ocean cruiser “Iduna” (formerly “Jampa”) built in America in 1887 and owned by the wife of William Don. 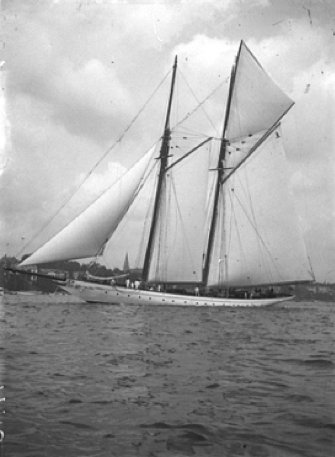 25 Feb 1902 “meteor III” dubbed Theodore Roosevelt’s daughter Alice. The Grand launching was held in the presence of Roosevelt, brother of the Kaiser, Prince Henry, and the many hundreds of American spectators. The event was captured on camera in March of the same year was assembled documentary film “the Meteor III Afloat” (IMDb tt0367447). It was a great occasion “warm up” German-American relations, and it was a really luxurious yacht.

During the service of the “Meteor III” the interest in yachting sport has reached unprecedented heights. On regatta gathered presented different classes and social groups and, of course, honorable representatives of other countries. “Arrive at this time in Kiel yard, and assembled there the entire German fleet. The race was followed by the court celebrations, the city was filled with plenty of visitors…” – writes about the Kiel week in 1907 by M. P. Bock, daughter of P. A. Stolypin.

And again: “Yachts participating in the races of the first class, was struck by its majestic beauty. After all, it was a real large two-masted ships of 350 tons displacement, with a team of seventy people, a huge sail area and very spacious, due to the lack of machinery, the premises. They were only three: the personal yacht of Kaiser Wilhelm, “meteor”, Krupp — “Germany” owned by the city of Hamburg “Hamburg”. 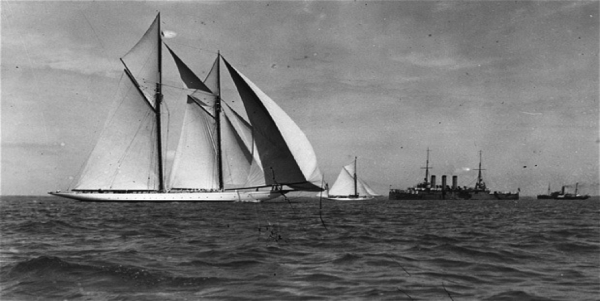 Great schooner “meteor III” properly served Wilhelm II for seven years, until 1909, when she began to give way to the latest yacht rivals. One of its main competitors, as noted in his memoirs, and M. P. Side, was a yacht “Germania”, built by the family Krupp for recently bought in Kiel shipyard Germaniawerft Fr Krupp. The obvious reaction Wilhelm became new order – “meteor IV”.

As to no longer meet the needs of the Emperor “Meteor III”, in 1909 it was sold to a famous German chemist Karl Dietrich Harris and his wife, Frau Hertha, the youngest daughter Werner von Siemens – founder of the transnational concern Siemens. Change of owners, the yacht received a new name “Northern star” and a new life: she has several times participated in the Kiel weeks and regularly went to sea to float freely. 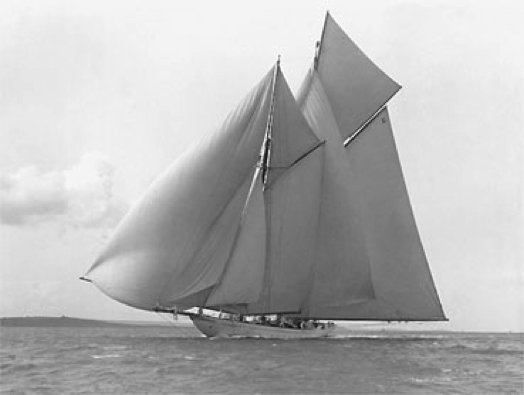 In early 1914, he was drafted into the “meteor V”. New schooner with a length of 156 ft (47.6 m) was also designed by max Ertem (Max Oertz) and built at the shipyard “Germany” (Germaniawerft Fr Krupp). Rapidly developing events on the world stage is not allowed “Meteor V” to build the same long and successful career as his predecessors. However, his sporting life was as short as it is bright in a matter of months before the outbreak of the First world war “meteor V” managed to participate and win the regatta Elbregatta.

It is known that all the “Meteors” after “write-off” for some time remained in the fleet of Wilhelm II as a training or pleasure yachts. The only exception was the “meteor III”, which, as mentioned above, immediately found a buyer.

In 1921 the yacht again replaced the owner – now it was Maurice Buno-Varilla, owner of the Paris newspaper Le Matin. In 1924 it was acquired by the Italian Baron Alberto Fassini. In 1932, Fassini sold the yacht to a man named Gillett, who soon passed it to the British brokers Campbel & Nicholsons. After several months of inactivity it was bought by an American named Francis Taylor and served him until 1940. Taylor sold the boat to Gerald S. Foley, who, in turn, sold it to David Feinberg, who is Nicholas Allen. In 1941, the boat was requisitioned in the Second world war was used for the needs of the Navy.

Ironically, in 1946, after long wanderings Imperial “meteor III”, under the name “Aldebaran”, found its last resting place on the dock for debriefing ships John Witt on the island of Shooters in the Bay of Newark – where from 1900 to 1910 was located Builder, Townsend & Downey Shipbuilding Co. and where he in 1902 solemnly came off the stocks.

With the beginning of the First world war traces of the other “Meteors” are completely lost. Some sources claim that all yachts were sunk in the fighting. Others say that they were later requisitioned by the government of the new Weimar Republic. There is also a view that the yacht, as the more movable of the Imperial estate, were sold in 1919 by Wilhelm II, who really needed a lot of money for the purchase of the castle in Dorne – a place six kilometers from Amerongen in the Netherlands, where the last Kaiser of Germany will spend the rest of my life.