Yesterday Today is Wind Day! Just a week ago, we celebrated World Oceans Day. And today, everyone who is in love with sail has another big holiday – World Wind Day! With what we congratulate you! For the first time, Wind Day was celebrated in Europe in 2007, and already in 2009 it acquired worldwide status. True, they proposed to establish it, organizations far from sailing – the European Wind Energy Association and the World Wind Energy Council. But we Read more

Today Today is World Oceans Day Happy holiday, friends! With a wonderful holiday for everyone whose life is somehow connected with the oceans. And we, lovers of the sail, do have the most direct relation to it. Moreover, for a true yachtsman every moment of communication with the ocean is an instant of happiness! © Kurt Arrigo The idea of ​​establishing this date was first voiced at the Planet Earth Summit, which took place in 1992 in Rio de Janeiro. Read more Today       Sail GP – Day One       The first day of SailGP in Sydney, Australia, ended with three races and a confident victory for the British team led by Sir Ben Ainsley. © Valeria Kovalenko Today the atmosphere of a real holiday reigned in Sydney, from the very morning on the waterfront it was possible to meet people in all kinds of yachting brands, with logos of world sailing events, crews and yacht classes. It was possible to watch the races Read more Yesterday       Another day – and …       The World Championship in Laser Radial, which takes place in Melbourne, has entered a decisive phase. Today, both women and men had 3 races. The same amount will be spent tomorrow – and the regatta will end there. Since, unfortunately, nothing shines for us in the women's tournament, we break the tradition and begin with a story about men's competitions, where Daniil Krutskikh is confidently leading. According to the sum of nine races held Read more Today       SailGP – Day 0       The first stage of SailGP starts in Sydney tomorrow, with 7 teams at the start. During training races, Sir Ben Ainsley showed his intentions by winning all 3 races. Today       One race per day       Today, at the World Championship in the Laser Radial class, which continues in Melbourne, both women and men again managed to hold one race (despite the fact that they wanted to hold three). Of the five Russian racers, the most successful on Monday was Yekaterina Zyuzina – she finished fifth in her fleet. And now, in the sum of two races, it takes 23rd place (29 points, arrivals 24-5). The achievements of other Russians are Read more Today       Thunderstorms all day …       We are compelled to upset everyone who follows the events at the world championship in the Laser Standard class, which takes place in Melbourne: there were no races today. From early morning until the afternoon, thunderstorms thundered over the regatta. In this regard, at three o'clock in the afternoon, local time, Racing Director Peter Merritt decided to cancel the competition on Friday. The race committee intends to hold three (rather than two) races on Saturday Read more 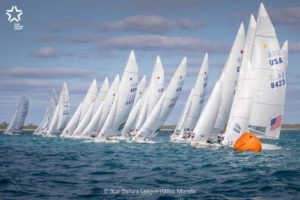 December 4, 2019       SSL-2019: first day results       The Nassau Yacht Club in the Bahamas has launched the 7th Star Sailors League finals – the decisive Star of the Year boat race in which famous yachtsmen from 22 countries take part. Curious statistics. Among the participants are four Olympic champions and 9 silver and bronze medalists of the Olympics, 23 world champions in the Star class, and two more in other Olympic classes. Plus a winner of the Volvo Ocean Race Read more 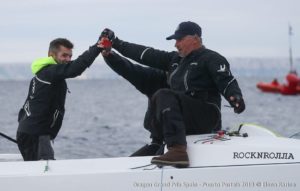 November 14, 2019       The only race of the day was won by Samokhin       On the third day of the IV stage of the European Cup in the Dragon class, which takes place in Puerto Portals in Mallorca, one race was held. I won it, as you already know, Dmitry Samokhin at RUS76 Roknrolla. © Elena Razina By the sum of three days and five races held (with one surge), the Samokhin team (Casper Kharsberg and Andrey Kirilyuk) takes second place Read more