Skip to content
Latest News:
Mini Cup Ust-Luga 2020: so – who will win?
Then the aroma of the emerging scandal.
New Oceanis 60 – the premiere of waiting in Dusseldorf 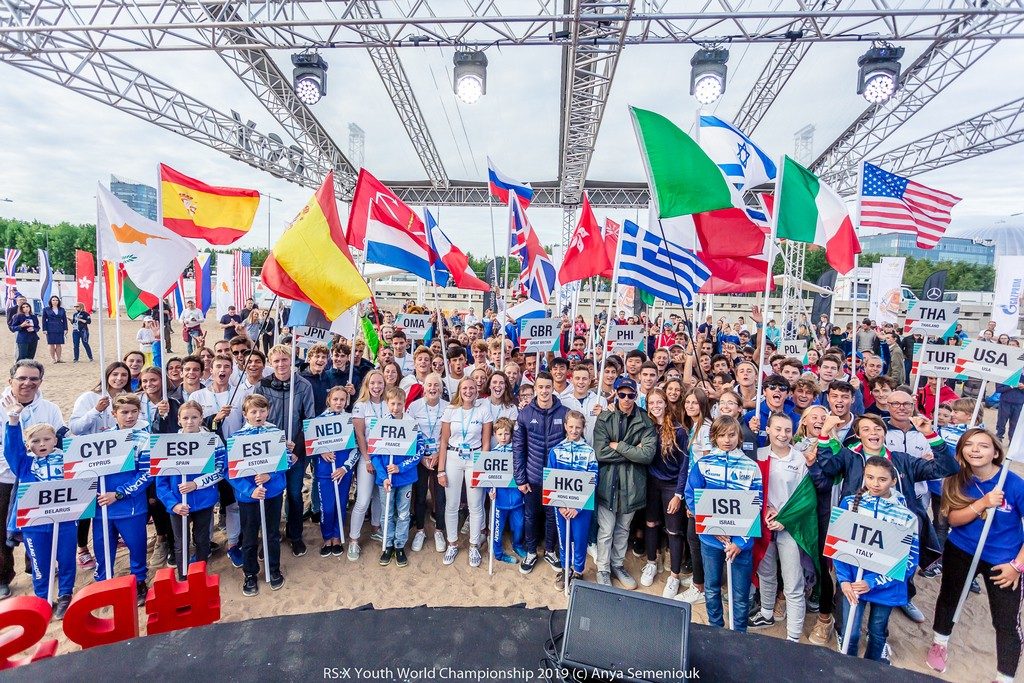 “It's really cool on the water!”

On August 5, in the park of the 300th anniversary of St. Petersburg, the opening ceremony of the world championship for windsurfing among juniors took place and passed training races.

On the registration day, the participants of the World Championship in RS: X class among juniors learned what a classic St. Petersburg summer is. Strong wind (up to 20 knots in gusts), low air temperature (15 degrees) and cold water (18 degrees) – these are the three main companions of windsurfers on training races.

And if the weather hardly pleased the guests of the racing village, then the athletes themselves glowed with happiness. In quite extreme weather conditions for the summer, they chased enough, cheerfully planed and checked the equipment before the races. After several races on the water, the guys returned a little tired, but happy.

Frenchman Fabien Pianaza – the main favorite of the World Windsurfing Championship – shared his impressions of the training.

– It’s very cool on the water because a strong wind blows. True, there is no point in drawing conclusions on the training races. Tomorrow there will be completely different weather conditions. This water area and weather suit me, so everything is super, ”said Pianaza, two-time world champion in windsurfing among juniors.

Some riders on the registration day chose a different tactic and stayed on the shore to save energy before the races themselves.

“I didn’t go to the water because I don’t want to get tired of the competition,” says Pole Jan Goralski. – I need more time to prepare the equipment. Everything should be perfect on Tuesday. I want to relax a bit, have fun and morale on the first day of the competition.

The organizers have prepared an extensive coastal program for athletes and guests of the park of the 300th anniversary of St. Petersburg. The participants were met by the mascot of the World Cup – Brown Bear. The organizing committee of the regatta decided to follow the traditions and chose as a mascot the world-famous symbol of our country, tested at the home Olympics of 1980 and 2014. The guys reacted vividly to the appearance of the bear, hugged and took pictures with him.

On stage, the best young windsurfers of the world, including silver medalist of the world championship Yana Reznikova and current champion Fabien Pianaza, raised the flags of the host country of the tournament – Russia, the general partner of the regatta – PJSC Gazprom, the organizer is the Yacht Club of St. Petersburg and Federation class RS: X.

During the opening ceremony of the world championship in RS: X class, honored guests addressed the athletes from the stage.

“On behalf of the Acting Governor of St. Petersburg Alexander Dmitrievich Beglov, I am pleased to welcome the participants of the World Championships in the Northern and Marine Capital,” said the Vice Governor of St. Petersburg Vladimir Kirillov. – It’s no coincidence that the regatta takes place in our city, the most beautiful city in Europe. I would like to wish the contest participants good victories, a good mood and, of course, to communicate with the beauties of our beloved city. I wish you happiness, success and tailwind!

“On behalf of the organizers of the competition, the St. Petersburg Yacht Club, I am glad to welcome you here,” said Elena Solovyova, Project Manager of the St. Petersburg Yacht Club. – Every year we hold large international regattas. This year we will organize the world championship in the RS: X Olympic class among juniors. Be sure that we will hold these competitions in the way we would accept the Olympic Games. In the coming years, the reconstruction of our Yacht Club will end. After which we will be very happy to host the largest international competitions and see you in St. Petersburg in the future. For us it is not just a sport. All of you represent your countries in Russia. I hope that you will see St. Petersburg and Russia as we see them and return home with the best of impressions.

“We are very pleased that the RS: X class international association has entrusted the world championship to this beautiful city,” said Vladimir Silkin, President of the All-Russian Sailing Federation. – This is the Northern and Sea Capital of Russia and the first Yacht Club, which appeared 301 a year ago. I believe that you will get an unforgettable experience from racing and a beautiful city. I am sure that all of you will leave here with the desire to return here as soon as possible in the future.

– As you can see, St. Petersburg is a sunny and windy city. I hope that this weather persists for the entire World Cup, ”said Andrews Poxy, international secretary general of the RS: X class. – Special thanks to all athletes who came to St. Petersburg. I also want to thank the volunteers, organizers, sponsors, and everyone who supports the RS: X class. I wish you a great race. But at the same time, this is a great time to enjoy the beautiful views of St. Petersburg.

The bronze medalist of the 2016 Olympic Games and the ambassador of the World Windsurfing Championship among juniors Stefania Elfutina recorded a video message for the participants of the World Championship in RS: X class.

“I'm glad to welcome you to the world championship in RS: X class among juniors in St. Petersburg,” said Stefania. – It is a great honor for us to host such important competitions in Russia. I wish everyone to show the best result and get a lot of positive emotions. Have a nice week!

At the end of the ceremony, participants and guests performed a cover band from Pskov, Drum & Jazz, who performed compositions in a variety of styles (from jazz to popular music) and helped athletes tune in to the right wave before the races themselves.

Maxim Nikolaev: "we will Continue training in Sochi"
Second in the Silver fleet
Such waves in the Mediterranean have not yet been seen!