With sadness we note from calendar of international regattas-2020 is almost nothing left. The organizers of most of these regattas prefer – away from sin – this year to cancel them. Damned coronavirus! Among the exceptions to the rule – the tenth edition of the Superyacht Challenge regatta in Antigua, which has just ended in the Caribbean. It was attended by 15 large yachts. Look at these pictures, envy. Quickly would have to be somewhere there in the distant South Read more

According to the World Sailing, there was a reduction of the list of manufacturers of the keel yachts, which are potential members of the sailing regatta of the Games in 2024. Original applications for participation in competition on the best keel yacht for the Olympics gave, as we reported, 26 manufacturers. Applicants had to go through several stages of selection, and the first one ended, according to the press service of World Sailing, January 15. By this time the contestants Read more 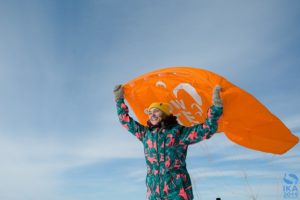 Today       There is no snow, but you hold on!       Abnormally warm weather in central Russia and throughout Europe has led to the fact that almost all winter sailing competitions are either canceled or postponed to February-March, in the hope of long-awaited cold weather. So, today information was received from the organizers of the World Cup in Estonia about the search for a new venue for the competition: “Today it is clear that the Pärnu Bay will not be covered with Read more 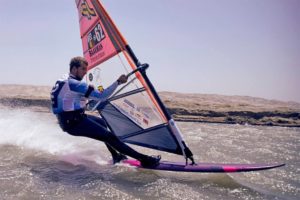 November 23rd, 2019       But there was no record …       Last Tuesday, foreign sailing sites (followed by us) reported that during the traditional Luderitz Speed ​​Challenge competitions in Namibia, a new world record was set: Belgian Vincent Valkeners covered a 500-meter distance on a sailboard at an average speed of 53.33 knots ! Alas, Walkeners did not go on record for long. This morning, the same foreign sailing sites reported that there was no record. The judges of the Luderitz Speed Read more 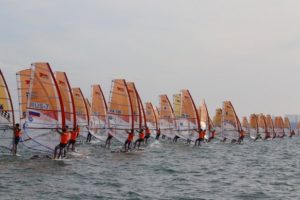 October 31, 2019       There is room to grow       In Spanish Cadiz, the final start of the season in the Techno 293 class continues. 369 athletes from 35 countries of the world participate in windsurfing competitions, including 19 from Russia. The third racing day of the regatta, according to the press service of the VFPS, turned out to be the most eventful so far. The refereeing team held seven races. However, only the younger boys managed to complete the qualification – Read more

Spanish in Cadiz continues the final start of the season in class “Techno 293”. In competitions in Windsurfing are involved 369 athletes from 35 countries, including from Russia – 19. The third racing day of the regatta, as reported by the press service of the WFTU, yet received the most intense. The team of judges spent seven races. However, to complete the qualifiers was only a Junior boys – in the category up to 15 years. “The day again was Read more

Bermuda was the first conference World Sailing, which was attended by over four hundred delegates from 68 countries. Official website of the WFTU published the reports of three Russian representatives in committees and subcommittees World Sailing. We felt that we needed these reports to reprint. Jan Dobrzycka – about the work of the Subcommittee match racing Committee sportprogramm: On 28 October in the hotel “Fairmont Southampton” (Bermuda) held a meeting of the Subcommittee of the match racing Committee sportprogramm WS Read more

October 15, 2019       There are eight!       Fifty-year-old American Randall Reeves (we have already written about his sailing Vigure8Voyage more than once) became the first yachtsman who managed to describe the "eight" during one voyage – to loop around both the Americas (via the Canadian Northwest Passage) and Antarctica. True, his original plan was to conduct a trip around the two continents, not only alone, but also non-stop. Alas, nothing came of this. Before his recent passage through northern Canada, Randall Read more

Fifty years of the American Randall Reeves (his swimming Vigure8Voyage we have written more than once) became the first sailor, who managed in the course of one voyage to describe the “eight” – to make a loop around the Americas (through the canadian Northwest passage), and Antarctica. However, his original plan was to spend the trip around two continents not only alone, but without stopping. Alas, nothing ever came of it. Before its recent passage in the canadian Arctic Randall Read more

After 7 races and three days of the championship in the Melges 20 class, which is held in Malcesine on lake Garda, in front of the masters – Italian crew Brontolo Racing (skipper Filippo Pacinotti). The Italians had 13 points (parishes day 3 – 4 – 9 the last of these results went into the release), and they are 8 points ahead of Russian Bogatyrs Igor Rytov. “Heroes” started the day by winning the first race, but then things have Read more