December 16, 2019       The Russians shared their buers!       According to the website of the All-Union Central Federal Assembly, referring to the press service of the Seven Feet Yacht Club, on December 14-15, two ice racing competitions took place on the ice of the Angular Bay – regional competitions in the classes of DN buer and ice buoy Optimist and the international regatta DN International Far East Cup 2019. According to one of the organizers of the competition, Valery Dichenko, this Read more

According to the website of the WFTU with reference to the press service of the yacht club “Seven feet”, 14-15 December on the ice of Corner Bay held two competitions buernomu sports competitions in classes Buer Buer DN and Ice optimist and DN international regatta International Far East Cup 2019. As one of organizers of competitions Valery Dychenko, this year in races across the ice, attended four foreign athletes – the strongest racers of the world, occupying a leading position Read more August 19, 2019       Two Russians – in the top ten According to the press service of the VFPS, in Mikhmoret (Israel), the continental championship in the Techno 293 class started, in which 168 athletes take part. Russia at the regatta is represented by Yana Reznikova, Ekaterina Kovaleva, Nikita Nezhentsev and Dmitry Nesterenko. After two competitive days of the European Championship, Ekaterina Kovaleva is the best among our athletes – she is the eighth among the youngest girls. In the last Read more

As the press service of the WFTU, in Michmoret (Israel) started the championship in the class Techno 293, which is attended by 168 athletes. Russia at the present regatta Jan Reznikov, Ekaterina Kovaleva, Nikita Nezhentsev and Dmitry Nesterenko. After two days competition of the European championship the best position from our athletes is Ekaterina Kovaleva – it eighth among Junior girls. In the last three races (a total of six), Catherine finished in the top three, finishing one second and Read more Yesterday       Italians or Russians?       The fourth stage of the European Division Melges 20 World League is in Riva del Garda (Italy). Five races were held – two on Friday, three today. According to their results ahead Italian Siderval (skipper – Marco Giannini). The team is well known – in the previous, third stage, Siderval became the second (after our Russian Bogatyrs). But it is surprising, with what advantage the Italians are now in the lead on Lake Garda. They have Read more

In Riva del Garda (Italy) is the fourth stage of the European Melges 20 division of the World League. Held five races – two on Friday, three today. According to their results ahead of the Italian Siderval (skipper Marco Giannini). The team is known – so, in the previous, third stage, Siderval became the second (after our Russian Bogatyrs). But wonder what advantage the Italians now, on lake Garda, in the lead. They have 16 points, while another Italian team Read more June 19, 2019       Russians came to the rescue       Seventy-five-year-old adventurer from the German Lübeck Burghard Piske flipped over in the western Pacific Ocean in his self-made Polynesian pro Ana-Varu – it was too late to poison the sheet. © Pieske Piske went from Guam to the atoll of Lamotrek with two local residents who followed the path of traditional migration of Polynesians as part of their Rapa Nui event. Under the conditions of an extremely strong storm, he spent many Read more

Seventy-five-year adventure in Lubeck, Germany, Burghard the Squeak turned over in the Western Pacific ocean on his makeshift Polynesian Proa Ana-Varu — too late to ease the mainsheet. © Pieske The squeak was coming from GUAM to the Atoll Lamotrek with two locals who followed the traditional path of migration of the Polynesians in the framework of its activities “Rapa Nui”. In an extremely violent storm he spent the night in a row many hours at the helm. In the Read more January 5, 2019       We cheer for the Russians!       In Fremantle (Australia) on Friday started the world championship in the class "Dragon". After two days of competition and three races, the current champion is leading – the Turkish flag team Provezza Dragon with skipper Andy Beadsworth (8 points, parishes 2 – 5 – 1). The regatta is attended by 34 crews, including two Russian. Annapurna Anatoly Loginov is now in 4th place (13 points, parishes 4–4–5), Rocknrolla Dmitry Samokhin is on Read more 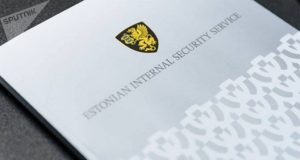 March 23, 2019       “Russians are coming!” Or yachts as a threat to Estonian independence On March 12 of this year, the Estonian Foreign Intelligence Department issued its regular review of threats to international security, in which 61 of the 67 pages of the Russian report are at once 61. What does it mean there, and why do we devote space and time to this issue? An entire chapter of the report, for example, is devoted to the “practice of using Read more