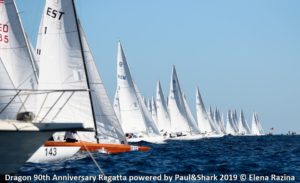 October 9, 2019       Today will be the 90th anniversary race!       Today in San Remo will continue the anniversary regatta dedicated to the 90th anniversary of the Dragon class. 162 crews take part in the races, including 16 teams representing Russia. Two first qualifying races were held yesterday (there will be four in total). Qualification competitions, as we have already said, are held in two fleets (81 teams each), with the leading crews included in the TOP-30 of the world ranking Read more

Today in Sanremo, will continue the anniversary regatta, dedicated to the 90th anniversary of the Dragon class. In the races take part 162 of the crew, including 16 teams from Russia. Yesterday was held the first two qualifying race (there will be four). Qualifying events, as we mentioned, are in two fleets (for the 81st team in each), and leading crews within the TOP 30 in the world rankings, equally divided between the fleets. In both fleets of victory in Read more

Today celebrated its tercentenary anniversary of one of the oldest lighthouses in Russia – Tolbukhin lighthouse, established near Kronstadt. We introduce you to the material “Fontanka” dedicated to this event. In St.-Petersburg on August 28, celebrated the 300th anniversary of the creation of the Tolbukhin lighthouse, one of the oldest in Russia, located a few kilometers from the island of Kotlin. Usually there’s only two people, but today was crowded. “Birthday” of the lighthouse is celebrated on August 28 formally, Read more Yesterday       Anniversary of the legendary lighthouse       Today, one of the oldest lighthouses in Russia, Tolbukhin Lighthouse, installed near Kronstadt, celebrated its 300th anniversary. We introduce you to the material "Fontanka.ru" dedicated to this event. On August 28, St. Petersburg celebrated the 300th anniversary of the creation of Tolbukhin Lighthouse, one of the oldest in Russia, located a few kilometers from the island of Kotlin. Usually only two people live here, but today it was crowded. The "birthday" of the lighthouse Read more August 5, 2019       Opening Ceremony – 300th Anniversary Park       Today in the park of the 300th anniversary of St. Petersburg at 18.00 the opening ceremony of the world championship in sailing in class RS: X among juniors will begin. St. Petersburg for the first time hosts world-class competitions in the Olympic sailing class. Boys and girls will compete in two age categories – up to 17 and up to 19 years. The ceremony will be attended by 103 windsurfers from Read more

Today in the Park of the 300th anniversary of St. Petersburg at 18.00 will begin the opening ceremony of the world Cup in sailing in the class RS:X Championships. Saint Petersburg for the first time takes world-class competition in the Olympic class sailing. Boys and girls will compete in two age groups – under 17 and 19 years. The ceremony will be attended by 103 rider from 19 countries. In Saint Petersburg there have arrived sportsmen from Russia, Israel, Turkey, Read more Today       In honor of the 90th anniversary       Fans of the “Dragon” class naturally know about this. The rest will let you know: this year one of the most famous classes of yachts turns 90 years old! The date, of course, is serious. The dragonists of the whole world intend to celebrate it with a jubilee regatta, which will be held in San Remo from October 5 to 13. And now – imagine: more than 140 crews have already announced to Read more April 18, 2019       Happy anniversary, Sergey Vasilievich!       Today marks the 60th anniversary of the Honored Master of Sports, Honored Coach of Russia, the international category judge Sergey Kuzovov. He is a multiple champion of the USSR and Russia. A coach who has trained a whole galaxy of wonderful yachtsmen. Nevertheless, now Kuzovov is known primarily as the most authoritative judge, because in recent years he has worked on hundreds of regattas! A characteristic touch: Sergey Vasilyevich was three times the Read more Today marks the 60 anniversary of the Honoured master of sports, Honored coach of Russia, judge of international category Sergey Kuzovov. He is a multiple champion of the USSR and Russia. The coach, who trained a whole galaxy of great boaters. And yet now, Kuzovova know primarily as the authoritative judge, because in recent years he has worked on hundreds of regattas! Distinctive touch: Sergey was thrice nominated for the “Sailor of the year”, but over and over again was Read more Famous race Los Angeles – Honolulu starts in 50 times One of the oldest offshore regatta in the world, Transpasific Yacht Race (or Transpac) in 2019 celebrates anniversary: fiftieth start. The first race took place 113 years ago, in June 1906. Then figure out who’s faster will be able to overcome the way from Los Angeles to Honolulu (Hawaii), decided only the crews of three yachts. The route took them 12 days. During the anniversary race July 10, 2019, for Read more