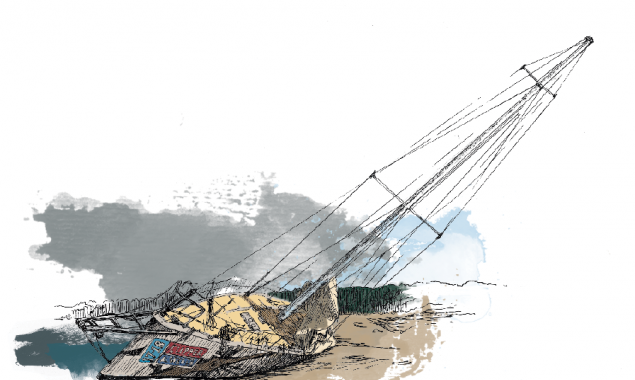 The Department for the investigation of marine accidents (MAIB, state organization in the UK responsible to lead the investigation of all marine incidents in waters of the United Kingdom. — Approx. MBY) has released a report on the incident with a pleasure craft. We are talking about a 70-foot sailing yacht CV24 registered for commercial use. This is one of twelve identical yachts, owned by the company Clipper Ventures, founded by sir Robin Knox-Johnston in order to give ordinary people an extraordinary opportunity to take part in the round the world race.

At the beginning of the third stage of the regatta CV24 was in the lead coming out of Cape town and South towards the Cape of Good Hope. And then suddenly… the boat ran aground. The team was removed from the Board and were evacuated, but the boat remained lying where she suffered an unhappy fate.

The MAIB report has excited my curiosity even before I finished reading the first paragraph, the confusion over the terms “course” and “path”. But then it went better. Restored hard drive navigation computer CV24 gave the investigator a detailed picture of what happened.

The original problem was the wind: it rose in the evening and night continued to grow, from-for what the team was difficult to keep a predetermined skipper course. Yacht itinerary, instead of going parallel to the shore, began to curl to the shore. About nine in the evening when the ship was in tacking, the skipper decided it was time to do a turn. But to make a tack on a big boat like the CV24 night and with inexperienced team — it is difficult and slow. Of course, everything went wrong, and meanwhile the clock ticked, and CV24 more and more unfolded to the shore.

The danger would be obvious to anyone who had the opportunity to glance at the monitor of the navigation computer, but unfortunately, it (the monitor) was on the lower deck. Being at the helm skipper and current information was available, but not one that was critically needed at the moment: the direction and force of the wind, course of the boat relative to the earth, the speed looked like (to speed up progress towards the destination). But the display card was not, as the sounder data of the deep. If there was all this, and a predetermined alarm signal, warning of shallow water, the skipper could be time to realize what is happening. But this did not happen.

The conclusion of the MAIB said: “the team on the deck had a poor understanding of the position of the vessel to assess the high risk of stranding. The only crew member that monitors the navigation situation was the skipper, but he was distracted by the need to coordinate the actions of the people on deck.”

Of course, it is unlikely that any of us will ever be in the “roaring forties” on the 70-foot sailing yacht. But the investigation of this incident revealed several problems to remember which is very useful for those sailors who walk on a motor yacht.

I bet that many people (and time!) had a chance to sail in conditions when an alarm signal (alarm) was not installed on the sounder! When nobody watched constantly for the Chartplotter and at least one person except the skipper, had an idea of the overall transition plan, with the exception of item where to stop for lunch… And this despite the fact that the Board can always be the case and there are many things that can distract our attention.