As the press service of the St. Petersburg school “Krestovsky island”, Euromarina Trofeo Optimist Torrevieja in the Spanish town of Torrevieja have passed the qualification starts. 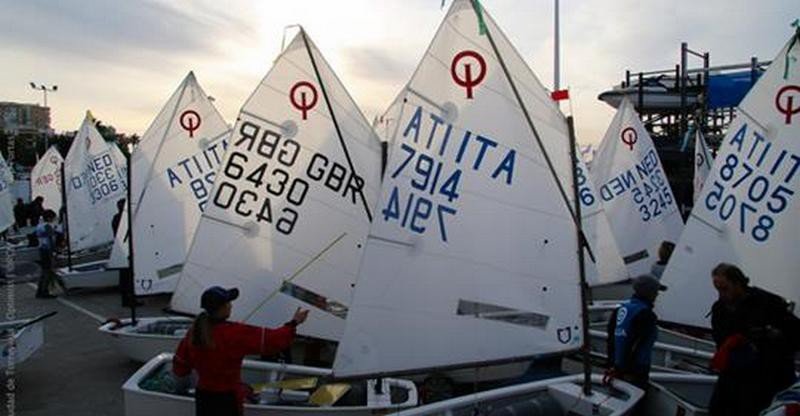 According to their results, the participants were divided into gold, silver, bronze and emerald fleets (in the past were lagging).

Yesterday was blowing Northwest wind 12 to 14 knots, but in the course of the day he prevailed, and by the beginning of the third race reached 18-20 knots, summarizes coach Ilya Eliseu. – The organizers were able to hold 3-4 race in different fleets: yellow and blue – three, because the day before it still managed to hold one race, and four races held yesterday in the red and white fleets.

In the end, two of our athletes qualified in the gold fleet. Artem Gunter finished the qualification at the 64th place, he has the assets of the second and fifth wards. Nice jump compared to last year. Danila Ivanov – 73 place (also in the asset is the fifth ward). Maxim Bondar at the end of the qualifying series took 102 place. A little not enough to get to the gold. In the last race Maxim was eighth, ahead of world champion Marco Gradoni, and lost it only at the finish. Very upset. But now there is one of the first in the start list silver fleet.

It should be noted that the opponents are very skilled. Suffice it to say that the current world champion is now in the fourth decade.

Our younger athletes based below. Dima Eremin took place in the bronze fleet, which for him is not so bad – 262 place of the 360 boats. In the first race, started very well and made a coup on rounding. Most likely from excitement. Already clearly, what to work on.

A few upset our girls – they got past the fleet. Sonya Polevoy did not work well to take the start: one of the races it was hit by a rival at the start, the other was not allowed in the first line. And these factors are not allowed to calm down and gather.

Stanislaus Hunker can not Express themselves in conditions of serious competition. All are very fast. If you make a mistake at the start, to recoup practically no chance. For many countries this is a qualifying regatta for the world and Europe.