On the decisions of the General Assembly of the International sailing Federation, held in Bermuda on 3 November, the website of the WFTU was told by a member of the World Sailing Council Oleg Ilyin: At the General Assembly was attended by delegates from 61 countries, and although it is about half of all members of WS, a quorum was achieved. The Assembly received the right to make decisions. As before, the two main issues on the agenda: Structural reform Read more 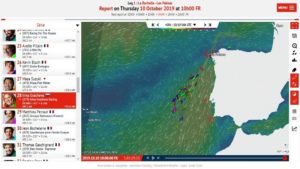 October 10, 2019       Mini-Transat: behind a sharp turn       The participants of the Mini-Transat 2019 regatta have already spent five days at sea. On the eve of the main part of the fleet, they successfully completed the racing passage through the Bay of Biscay and, turning south, ended up in a tailwind of the Atlantic. By Thursday morning, the participating yachts had already covered more than half the distance from La Rochelle to Las Palmas (Gran Canaria).

Five days spent in the sea the participants of the regatta Mini Transat 2019. On the eve of the main part of the fleet have successfully completed the race crossing the Bay of Biscay, and, turning to the South, were in the wind of the Atlantic. By Thursday morning boats were already more than half the distance from La Rochelle to Las Palmas (Gran Canaria). Cape Finisterre was left behind for almost all riders with a few exceptions: Jean-Baptiste Ternon Read more