June 16, 2019       "Warriors"! And you doubted?       The third stage of the European division of the World League in the Melges20 class of yachts, which took place in Italian Scarlino, ended, as expected, with the victory of Russian Bogatyrs – Igor Rytov, Anton Sergeev and Konstantin Besputin. On Sunday, the “Heroes” performed far less brilliantly than the day before when they won all three races. But, nevertheless, the third and two-eighth parishes (one went for the release) turned out to Read more May 27, 2019       On the pedestal "Warriors" and "Pirogovo"       Only four races were held in Puntaldii on the island of Sardinia, where the second stage of the European Division of the World League in the Melges 20 yacht class was completed. Recall, before the starts on Sunday, in the sum of three races, there were “Russian bogatyrs” ahead of Igor Rytov – 12 points. At the same time, the Argentinean Boogie 2.0 skipper Pierluigi Rombelli had the same amount. The Read more April 6, 2019       Now "Warriors" third       In Miami, the world championship in the Melges 20 yacht class continues. One of the main favorites of the tournament – “Russian bogatyrs” Igor Rytov (Konstantin Besputin, Anton Sergeyev) – is still third in the table. According to the results of three days of competition and five races, Russian Bogatyrs scored 20 points (parishes 3–4–6–3–4). Ahead of them are two American crews – Hartbreaker skipper Robert Hughes (15 points, arrivals 6 – 2 – Read more April 27, 2019       "Warriors" on a par with the leader       In the town of Villasimius on the southeast coast of Sardinia, the first stage of the European division of the World League started in the class of yachts Melges 20. 21 teams take part in the regatta, including 7 under the Russian flag. On Friday, there were 3 races. According to their results, the Italians in Fremitod’arja are in front of 13 points, the parishes are 6–1–6. The same number Read more April 27, 2019       "Warriors" went into the lead!       On the second day of the starting stage of the European division of the World League in the class of yachts Melges 20, which takes place in Villasimius in Sardinia, two races were held. © Zerogradinord On account of the Russian Bogatyrs Igor Rytov (Anton Sergeev, Konstantin Besputin) on Saturday, the second and first parishes. Thanks to this, the “Bogatyri” not only took the lead in the overall standings (after two days Read more 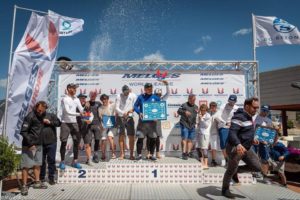 April 28, 2019       With the victory, "Warriors"! The team of Russian Bogatyrs Igor Rytov (Anton Sergeyev, Konstantin Besputin) won the first stage of the European division of the World League in the class of yachts Melges 20, which ended in the city of Villasimius (Sardinia). On the final day of the regatta, one race was held. The Bogatyrs took second place in it, and this was more than enough for a common victory. In the sum of six races (one Read more