The Briton, Shirley Robertson – the winner of two gold medals at the sail. First she won in 2000 in Sydney (then Shirley played in the class “Europe”). The second four years later in Athens (this time in the class “Yuengling”). After the Olympic performances of Shirley completed – it seemed, once and for all. Became famous radiojournalists received a number of professional awards. Plus commentary for bi-Bi-si Olympic sailing competitions in 2008 and 2012. And suddenly… Recently, Mrs. Robertson Read more

2013 world champion in a class “Finn” Brazilian Jorge Zarif acknowledged that during the pre-Olympic regatta in Enoshima (Japan) in August last year used a substance on the prohibited list of world anti-doping Agency (WADA). Zarif is one of the main contenders for gold in the Tokyo Olympics claims that the substance gave him his physician. Otherwise, the Brazilian had to undergo surgery – which would be forced to miss the two most important of the regatta. Zarif, in his Read more Today       Will have time to return to the Olympics       The 2013 World Champion in the Finn class, Brazilian Jorge Zarif, admitted that he used a substance from the forbidden list of the World Anti-Doping Agency (WADA) during the pre-Olympic regatta in Enoshima (Japan) in August. Zarif – one of the main contenders for the gold of the Tokyo Olympics – claims that this substance was given to him by his doctor. Otherwise, the Brazilian would have to go to surgery Read more 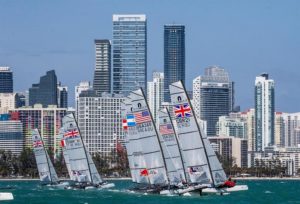 January 28, 2019       At the start – 34 champions and prize-winners of the Olympics!       Tomorrow, January 29, overseas, in Miami, the first races of the second stage of the sailing World Cup 2019 will be held. The regatta in Miami this year marks the 30th anniversary. By tradition, she opens the season of competition in the Olympic disciplines sail. In the current – pre-Olympic – year, attention to this regatta is altogether heightened. Here is just one fact: 650 yachtsmen Read more Tomorrow, January 29, ocean, Miami will host the first race of the second stage of the sailing world Cup-2019. Regatta in Miami this year celebrates its 30th anniversary. Traditionally, it opens the season of competitions in the Olympic disciplines of the sail. This pre-Olympic year, attention to this regatta and all increased. Here is just one fact: in Miami profit 650 sailors from 60 countries, including 34 from champion and medalist of the Olympics! Agree, that says a lot. And Read more