Successful for the young Russian athletes in the class “Optimist” was jubilee, the 20th season of the international Euromed regatta in Malta. In the main fleet, which were prepared by the athletes of the “Optimist” class, Kirill Shanenkov entered the top ten of the overall standings. Participation in the Malta regatta Euromed – traditional program number pre-season training for Russian athletes. This year, with the support of the Association “Optimist” class, the Russian team has been greatly expanded. The team Read more 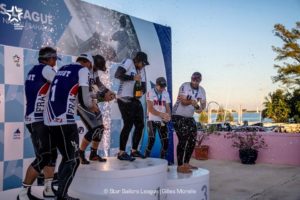 December 8, 2019       SSL Finish Ended       The title of winners of the 7th finals of the Star Sailors League – the main regatta of the year in the Star class, which ended at the Nassau Yacht Club in the Bahamas – went to the Olympic champion 2000 at Finn Ian Persie (Great Britain) and the former world champion in "Star" Anders Extrem (Sweden). In second place are the French, Javier Rohar and Pierre-Alexis Ponso, in third place are the Norwegian Read more

The last day of the anniversary of the black sea regatta (the regatta is as much as in 1949!) gave athletes a great racing conditions, wind from 6 to 14 knots and three of the final race in each class. The fight in the leading group was very tight and went to the last race, сообщаетPR-Director of the Yacht club of Saint-Petersburg Alexey Fats. According to the results of the regatta determined the national Champions in the Junior classes, “Laser-radial” Read more

From 10 to 17 July, the third consecutive year in Saint-Petersburg at various venues in the city events were held as part of the main Maritime festival North of the capital, “Baltic yacht week”. According to tradition, entrance to all events was free. Organizers: Committee for tourism development of Saint-Petersburg, Saint-Petersburg sailing Union. The start of the festival gave Marcellin schooner “Lady L” and a beautiful ship stylized as a ship of the 18th century. Sailboat moored on the University Read more The team of Frenchman armel Le Cle (Armel Le Cléac’h), whose trimaran was left without one of the side housings 6 Nov during the race, Route du Rhum 340 nautical miles North-East from the Azores islandin thefinished search of fragments of the boat. After the team’s return in Vigo (France) hope for the restoration of the Banque Populaire IX is no more. The operation began a few days after the accident and continued for 10 days. Due to stormy weather Read more From 13 to 19 August in St. Petersburg was the second time the “Baltic yacht week”. The event brought together national and regional regattas, themed entertainment and educational program for citizens and business session. Organized such a huge event Committee for tourism development of St. Petersburg and the St. Petersburg sailing Union. In the framework of the opening ceremony of the “Week”, held on 13 August, was the start of the exhibition “the Russian sailing – 300 years”, telling the Read more