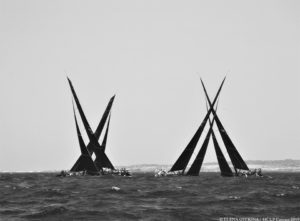 October 6, 2019       Champagne for the race!       On Saturday, October 5, the penultimate day of the fourth regatta season of the 44Cup, held in Portuguese Cascais, two of the three Russian teams finally managed to advance up the table. From the scene, Elena Otekina reports: © Elena Otekina Team Nika Vladimir Prosikhina continued the positive trend and climbed to third place, coming in 3rd and 6th in the first two races of the day and winning third. Before the final Read more

On Saturday, October 5, on the penultimate day of the fourth season of the regatta draw 44Cup held in Portugal Cascais, two Russian teams of three finally managed to move up the table. From the event reports Elena Tekina: © Elena Tekina Team Nika’s Vladimir Prosikhin continued the positive trend and climbed to third place, coming 3rd and 6th in the first two races of the day and winning the third. Before the final day, the team is 8 points Read more For Elena Tekinay not keep up. Just a few days ago she was in Valencia and now transfers from Cascais (Portugal) where it started the world championship in class RC44: © Elena Tekina Thursday, 27 September, Cascais with the great performance of the Russian team Bronenosec Sailing, headed steering Kirill Frolov and tactician by new Zealander Cameron This started the world championship in class RC44. The crew, representing the Yacht club of Saint-Petersburg first day of racing was able to Read more