Yesterday       Bravo, Seven Feet Team!       Today, September 3, at 2 a.m., in Vladivostok, the first yacht finished in the sailing race of 1000 miles from the Chinese city of Qingdao. This race is the first stage of the 4th Far East Cup International regatta 2019. Competitions are held on Beneteau First 40 yachts. The first to complete the most difficult long race was the Seven Feet Team with captain Ilya Ermakov. The crew represents the Seven Feet Yacht Club from Read more August 10, 2019       Bravo, Yana !!!       Yana Reznikova became the world champion in the Olympic class RS: X among juniors On the final day of the world championship, a wind of 5-6 knots allowed the organizers to fulfill the maximum plan. After a short pause due to the lack of wind, the judges held one start in the women's, silver and gold fleets. They were attended by all windsurfers, with the exception of the first 10 racers among women and Read more

Jan Reznikov became world champion in the Olympic class RS:X Junior On the final day of the world championship wind strength of 5-6 knots allowed the organizers to carry out the plan maximum. After a short pause, associated with the absence of wind, the judges held one start in the women’s, silver and gold fleets. In them participated all windsurfers, with the exception of the first 10 riders among women and men. They waited for the medal race. The medal Read more March 22, 2019       Bravo, Igor Zakhartsev!       According to the portal https://volga.news, the samorirec Igor Zakhartsev won the gold of the world cup of snowkiting, the last (fifth) stage of which took place on Silvaplana Lake in Switzerland from March 15-17. © http://snowkiteworldcup.com/ It is noteworthy that on March 5, Zakhartsev turned 60, and he has to compete with 20-30-year-old athletes. The second place in the World Cup was taken by another Russian – Artem Renev from Yekaterinburg, the third – Read more As the portal https://volga.news the Russian Igor zahartsev won gold at the world Cup in Snowkiting, the last (fifth) stage of which was held on lake Silvaplana in Switzerland, March 15-17. © http://snowkiteworldcup.com/ It is noteworthy that on 5 March Zakharceva is 60 years old, and he has to compete with 20-30 year old athletes. Second place at the world Cup was taken by another Russian – Artem Renew from Ekaterinburg, the third – Austrian Reinhold Gehrer. Buyer 109-metre yacht Oceanco Bravo Eugenia was the owner of American football team the Dallas Cowboys Jerry Jones (Jerry Jones). Its official name is the boat, formerly known as Project Bravo, was in honor of the spouse of the customer of Eugenia Jones (Eugenia Jones). Bravo Eugenia, the length of which exceeds the length of a football field, costing the businessman-billionaire in $250 million. On Board there are two helicopter pads, a garage to store the tenders and jet skis, Read more Test the stability and maneuverability of the 109-meter superyacht takes place off the coast of Holland One of the largest boat Dutch shipyard Oceanco, model Y718, also known as Project Bravo, a little less than a month after launching, went to surf in the North sea undergoing sea trials. It is reported Superyacht Times. The shipyard has not yet revealed the detailed specifications of the project, however, the journalists managed to learn that the boat is able to reach a Read more 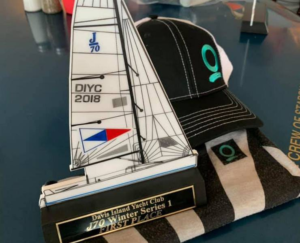 In Tampa (Florida, U.S.) hosted the first round of the Winter series in class J/70. In the race was attended by 47 crews. © Igor Rytov The victory was celebrated by the “Russian knights”, composed by Igor Rytov, Constantine Rasputina, Anton Sergeev and American Michael Booker. The competition was scheduled on 8th and 9th December, but on Sunday the race took place, summed up the weather. The winner was determined by the results of the first day: Russian Bogatyrs – Read more