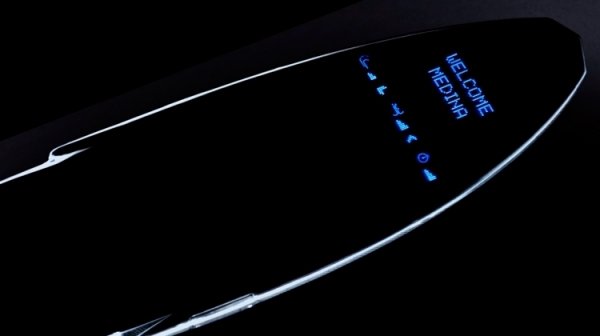 Some concepts on the subject of surfing, you remember? We come to mind the business of hydro-suit Wetsuit from True Japanese Studio Quiksilver and surfboard Lampuga electric, you will be delighted when you meet them.

A pleasant surprise was the appearance in the ranks of the developers of innovative solutions to conquer the sea waves technology giant Samsung. Brazilian design division of the company that is the Creator of all recent Samsung smartphones and tablets, introduced the world’s first smart surfboard Surfboard Galaxy.

In this video, the filming of which was attended by Brazilian surfer, world champion, Gabriel Medina, from Samsung appearance no different from an ordinary surf boards while in the shot misses its integrated led screen.

Galaxy Surfboard is associated with the Samsung Galaxy S7 and transmits the surfer text messages from spectators or coaches on the shore. They can encourage the athlete to give some advice or warn you about something important. Gabriel Medina on video message sending his father Charles.

Also Galaxy Surfboard surfer shares with up to date information about sea conditions, the height and frequency of waves. In General, this is the perfect Board for training, but we think the Galaxy Surfboard is the ancestor of a whole range of gadgets for the water sports, which will be popular among professionals and Amateurs.

As reported by Samsung, at the moment, the Board is the only one who starred in the movie with Gabriel Medina. On the launch of the Galaxy Surfboard in the commercial production of the question. However, we all know that Samsung will not share information about a similar concept and to remove such an expensive movie just.