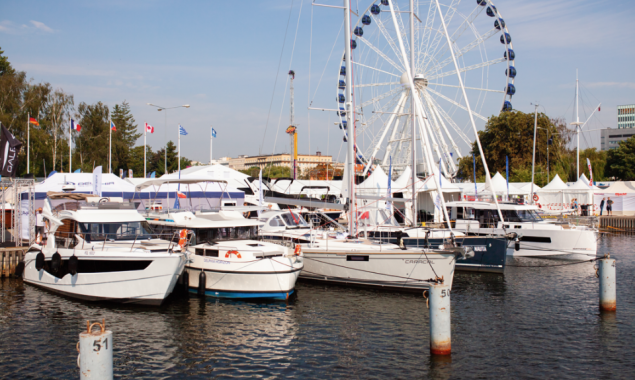 Three days in early August, held at the exhibition in Gdynia and in gdańsk at the invitation of the company Murator Expo is filled to the limit dealing with Polish builders, yachts, boat tests and visits to companies of the yachting industry, has allowed a better understanding of how Poland looks today yacht.

Wiatr I Woda, organized by the Yacht Expo, Murator Expo (the company is part of Polboat — Polish chamber of yacht industry and water sports, uniting 70% of the companies in the industry) and the magazine Zagle, was held in the yacht club Gdynia. This year it was attended by 130 exhibitors presenting water 120 boats, domestic and imported, different types and sizes, and have deployed their expositions on the shore with the offer of equipment and services. According to the organizers, this year the exhibition area increased by 15%, and the exhibition was visited by 12,000 people. Despite the fact that the yacht industry in Poland works mainly for export, the show was clearly focused on domestic consumers. During the work boat show, the winners of Gdynia Yacht Design according to tradition was given a special award Gdynia President’s Award. In the category of motor boats, it was awarded to Galeon 485 HTS. The jury also highlighted the Northman model 1200, which premiered at the same time.

The yacht industry in Poland is really focused on exports this year, total production will reach 22 500 buildings, of which 95% will go abroad. The first year Poland ranks second in the world (after the USA) for the production of boats of 5-9 m.

From industry leaders will be called Galeon Yachts: last year, the company has built around 150 ships and reported a significant increase in their income. At this point in the Galeon range up to 30 models made of fiberglass of different types (with flybridge and sports) in length from 10 to 25 m (the flagship, the 780 Crystal). The shipyard also builds a line of 14 boats with outboard motors under the brand Galia: the annual output is several hundred buildings. Another “excellent” — Parker Poland: current production of more than 700 buildings per year, including about 100 built under contract for other brands. The range of Parker — 16 models up to 11 metres, all with outboard motors, including the new Monaco model. Not to mention Sunreef Venture S. A. the Company is a leader in the design and production of sailing and motor Multihull vessels premium, including superyachts, is considered a trendsetter in this segment and the generator of many advanced technical solutions.

Another company, a manufacturer of superyachts, Conrad S. A., which will be described further.

In Poland shipyard is independent and included in the holdings. The latter refers Ostróda Yacht (Beneteau group): there are building, in particular, the model Merry Fisher. By the way, recently announced the establishment of a joint venture between Ostróda yachts and Delphia Yachts: presumably, French locomotive will give the famous Polish shipyard proper acceleration.

During the short conclusions of the boats from the show for the open sea on Board were a lot of people, so the tests were more exploratory in nature. However, something about the presented models we can say.

Suncamper 35 (Balt Yacht). Curious model with three cabins, two latrines and a kitchen, where the engine can be used, podlesnik (up to 115 HP), “hospital” or the electric motor, and the chassis is designed for displacement or transitional mode (depending on power). Futura 36 (Cobra Yachts). Somehow called yard house boat this model with a layout of 3 or 4 cabins and is also suitable for family use and Charter. Large areas, open space, low-cost, practical finish… With two Yanmar 150 HP we squeezed out of it 9 knots.

Parker 110 Monaco (Parker Poland). Seaworthy cruiser with two Mercury Verado 300 HP attracted the interest of a sliding design in the stern, closing podlesnik, layout, reminiscent of the most modern European cruisers of this class, and decent speed 37 knots with that on Board were 12 people.

The program proposed by Murator Expo, included a visit of some Polish companies in the region of gdańsk working in the yachting industry. We visited the shipyard Conrad S. A. (now part of the holding Marine Projects Ltd), where they build motor and sailing yachts with length from 12 to 65 m as well as spend rarity. There we gave a presentation recently delivered to the customer motor yacht Viatoris. In the same area is Sail Service: almost 70 years of sailing there sew clothes for customers from almost 40 countries. Among the “dressed” the company ships a lot of big names. Call only Russian “Sedov”, “Kruzenshtern”, “Mir”, “Nadezhda”, “Pallada”. A young company, Green Dream Boats builds eco-friendly composite catamarans on electric. One of the projects Solliner is a vessel with a length of 6.2 m, capacity-10 people. The Torqeedo electric motor with power up to 4 kW can reach a speed of 10-12 km/h. pop-up roof with the built in it photovoltaic panels in the lower position serves to protect the cockpit. In the evening we saw such Solliner in Gdansk cheerfully took passengers along the Motlawa river.

Techno Marine produces different boats, including high-speed RIB’s on the basis of aluminum construction with cylinders of Hypalon, pleasure and professional use, up to 20 m or more. At the shipyard (almost a full cycle) almost everything is done “under one roof”: metal cutting and welding of structures formed of fiberglass, manufacturing of cylinders. At the time of our visit, most staff were on holiday, but judging by the equipment of the shops, at the appointed time, the work there seething.

As shown by the trip to Poland, on the background of the orientation of the yachting industry on the foreign market, domestic demand revived gradually, the growth of prosperity of the population. The shipyard, continuing the boat building orders from third-party brands from Europe and the USA, and produce its models, including a leisurely boat for inland waters occupy a niche. The volume of production sailing yachts, as well as throughout Europe, is very small. And some companies even settled in the segment of superyachts.

Here we note the sailing catamaran Che (Sunreef Yachts, 34.6 m., 2010) and two boats of the shipyard Conrad Yachts: sailing Lunar (35,3 m, 2013), built for a customer from USA, and also Viatoris (40 m, 2018) — the largest motor yacht ever built in Poland (project Raymond Langton). Those who have seen Viatoris and has been on its Board, note the cool design of the ship and the excellent quality of construction. Promising portfolio of the shipyard are the projects of motor yachts up to 70 m from the Langton and the Bureau A. Vallicelli & Co (Italy). Neither random nor timidly — the motto emblazoned on the coat of arms of the city of Gdansk since time immemorial. I translated it from Latin as: “neither accidental nor timidly”. These words correspond exactly to the strategy of the Polish yacht industry in recent decades, the pace of development which are quite impressive. And this is perhaps its main trend.