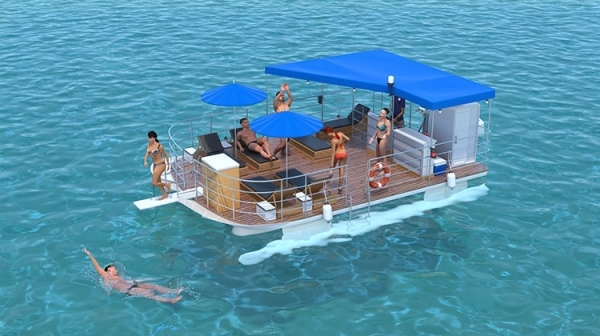 The popularity of the Crimean beaches is growing from year to year, and again we hear that in the midst of the season here are always Packed. Alexander Kornienko, young designer of the ships from Sevastopol, saw this as a chance to implement its project, over the last few years and which we hope will lead not only to commercial success, but well-deserved academic degrees.

The developer suggested that a great solution against the crowded and dirty beaches will be a ship or even a floating island, which will give the opportunity to move away from the bustle of the shore, and there, in the silence, clarity and peace to swim, sunbathe, and maybe even arrange a romantic dinner or a cocktail party.

So the idea that Alexander called SunDeck. It’s his own version of a catamaran with small waterplane area – SMPW, or how it sounds in international practice, Small Waterplane Area Twin Hull (SWATH). Vessels of this type have a reduced resistance and reduced rolling movement, which ensures comfortable stay of passengers on Board even with strong waves. However, these features are manifested only while stationary at anchor or moving at high speed. At low speeds the same features SEV cause the opposite effect: a breaking wave gives a significant increment of additional volume of buoyancy, the center value is shifted, the ship becomes more susceptible to pitching.

The problem of low initial stability for SunDeck developer decided with your own dissertation research and patented technology. Under the deck of the vessel includes an inflatable elastic container, the pressure in which it is possible to change, thus damping the waves. In addition, optional provides another stabilization device is a wing between the hulls, which will act as an additional guarantee of stability and will slow vertical rocking, as the speed (flow of water) and at anchor.

SunDeck is a floating platform with a motor, for up to 12 people – 11 passengers and 1 crew member. On Board there are sun loungers, comfortable Seating, a trampoline at 70 cm above the water, and a fridge for snacks, ice cream and soft drinks. Security provided life preservers and vests. The deck has the necessary reserve buoyancy in the event of deteriorating weather conditions. Guard railing around the perimeter of the deck protects from unwanted jumps in the water. 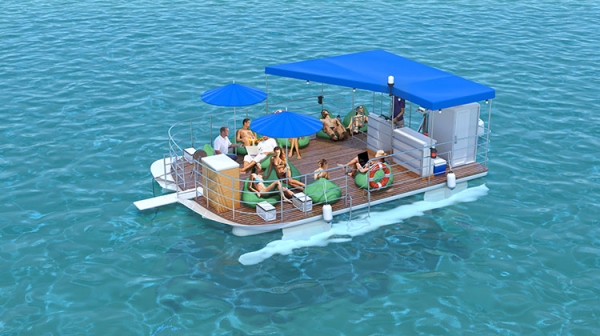 The ship resembles the appearance of the increasingly popular pontoon boats, but, as we have said, applies to vessels with small waterplane area and, hence, in contrast to the pontoons has a lower rolling and reduced resistance to movement. In addition, the SunDeck above the freeboard, and the probability of flooding of the deck is minimized.

The maximum length of the vessel is 9.5 m, width-4.7 metres, maximum draught of 1.1 metres and a displacement at maximum draught of 3.6 tons. Body material is fiberglass. As the engine provides the motor power 15-30 HP (22 kW) for a maximum speed of 10 knots. Class of ship is not assigned.

Curiously, the SunDeck is primarily a scientific project, and only then for commercial purposes. Alexander Kornienko told us that everything is based on his thesis “a System to improve the seaworthiness of ships,” which he began writing in 2010, being the applicant of PhD at the Department of Ships and marine engineering Sevastopol national technical University.

Work he did not finish, took time out for an indefinite period: realized that without the experiment, a topic to master, and the family came replenishment – at first one son, then another – we had to earn and not to learn. However, the gift is spent on the dissertation time has not passed. Emerged in this period the idea of elastic vessels with a variable pressure, which would have solved the problem of low initial stability SMPV, Alexander brought to mind, and the technology patented. It a few years later formed the basis of the catamaran SunDeck.

Now the developer has undertaken to finish his scientific work – with a new theme: “enhancing the stability of vessels with small waterplane area (SMPV)”. To defend Alexander plans on the head sample of the catamaran SunDeck in Saint-Petersburg state marine technical University.

As for the project, SunDeck, at the moment he is at the stage of obtaining a new patent. The next step will be to build a pilot model, for which Alexander Kornienko already started looking for funding. He launched a crowdfunding company indiegogo.com and now to participate in the project as an investor can absolutely anyone. Directly with the developer can be contacted through the group Vkontakte. 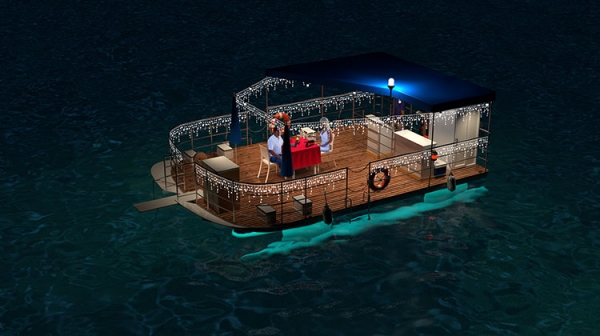 Rolex Middle Sea Race in 2018: the start is given!